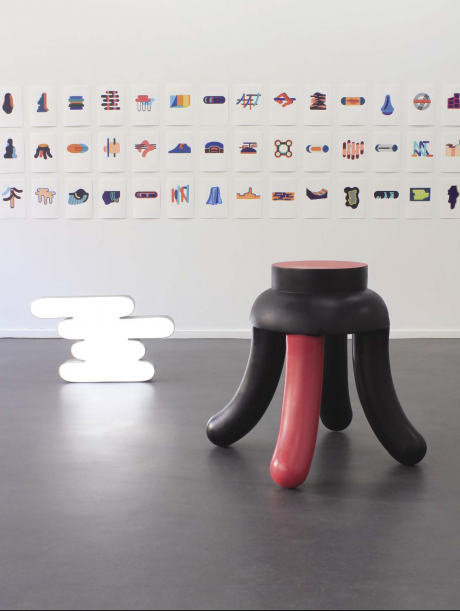 In search of the ideal image and the sign system of a potential world that can be shared universally across cultures, Yuya Suzuki works on “archegraphs”, as he calls to them. He responds to the mundane things in the city, such as trash, architectural details, walls covered by torn posters or graffiti, shapes in nature – the leftovers that are perceived continually but unconsciously within urban landscapes. These non-functioning elements in public space are abstracted throughout an extensive drawing process and transformed into compositions of colour and shape that point to their origins and result in a new, complete shape for themselves. Together, they create Suzuki’s personal alphabet.

In his exhibition Post Language Realm at Künstlerhaus Bethanien, Suzuki shows an installation composed of 3-D objects, animations, murals and light boxes. The artist focuses on the potential and simultaneous impossibility of a universal language. Through his archaeological search for independent signs in public space, he turns away from hierarchical symbols that simulate power on the most diverse levels, for example in the form of brands or stereotypical images from the advertising industry.

Yuya Suzuki was born in Fukushima, Japan in 1983, and lives and works in Berlin and Sapporo, Japan. He studied at Nihon University College of Art and has received numerous awards and grants, most recently the Overseas Research Fellowship from the Japanese Government Agency for Cultural Affairs, Japan. His most recent solo exhibitions have taken place at Migrant Bird Space in Berlin ( 2020), Siao-Long Children’s Museum of Arts in Tainan, Taiwan (2019) and MUMU Gallery in Tainan, Taiwan (2019). Suzuki has also presented his work in numerous solo and group exhibitions in Europe and Asia. Yuya Suzuki is a grantee of the Bunkacho – Agency for Cultural Affairs, Government of Japan, the Nomura Foundation, Japan & Stiftung Kunstfonds, and Neustart Kultur, Germany. www.yuyasuzuki.com