Two Years Elapse Between the Third and Fourth Act 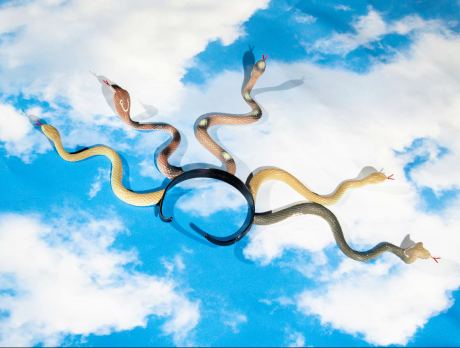 In her solo exhibition Two Years Elapse Between the Third and Fourth Act at Künstlerhaus Bethanien, Melanie Jame Wolf presents a video installation consisting of a new film and a series of textile works. The exhibition explores the idea of “the rehearsal” in both theatrical and everyday contexts, understanding it as a strategy of repetitive practices that people use to prepare for imagined, fantastic embodiment in speculative future scenarios.

This exhibition continues the through line in Wolf’s practice of dissecting specific performance techniques as a lens for unpacking broader contemporary social and cultural currents. This meta-theatricality occurs in the film ‘Understudies’ through seven performers inhabiting the singular role of The Actress. The Actresses rehearse variations of Nina’s monolog from Chekhov’s The Seagull, atomising the text by means of seriously playful repetition to render it both sublime and ridiculous. The specified labour of staging oneself is simultaneously made visible. ‘You have no idea what it is like to not know what to do with your hands! Now I am changed! ‘, The Actresses rehearse whilst the fabric backgrounds that frame them are constantly replaced. A selection of these textile works is featured in the exhibition alongside the film.

In her work Melanie Jame Wolf deals with the poetics and problematics of class, pop, sensuality, gender, narratology and the body as a political riddle. She plays with performance techniques such as imitation, the melodrama or stand-up, using performance as the motor to understand and highlight the fluidity of subjectivity from a queer-feminist perspective.