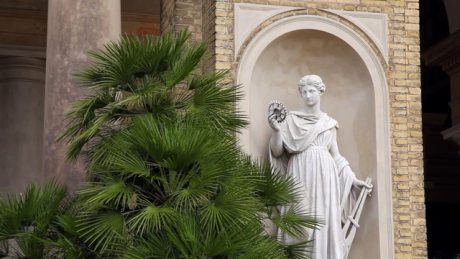 Every year in October, the tubs of exotic plants in the park of Sanssouci Palace in Potsdam are brought into the Orangery to protect them from wind and cold. This storage highlights the commodification of living things and addresses the colonial practice of migrating plants. The omission of humans as the cause of these abrupt movements in the cinematic image humanizes the plants. While they seem to float through the historical backdrop, other traces of German colonial history become visible, such as those being investigated by the working group “Postcolonial Potsdam” since 2014.

curated by Robert Seidel within the programme Phantom Horizons