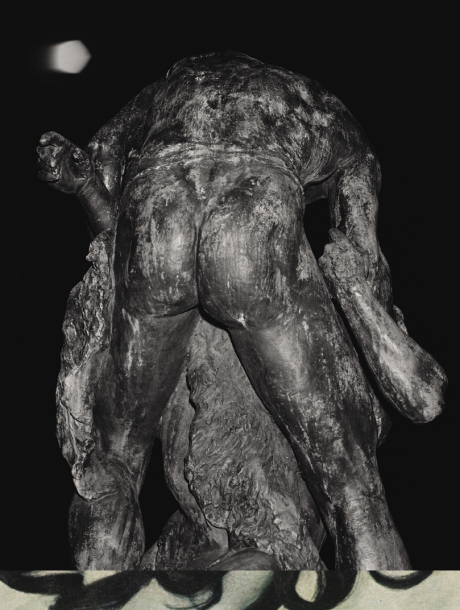 To enter Santiago Mostyn’s exhibition space at Künstlerhaus Bethanien, one passes by a wall work conceived as the ‘reverse side’ of the main installation. The wall is covered with reproductions of pages from Jet Magazine, accompanied by the double-sided photographic work Ghost/Monument. Sharing a single frame, Ghost is an image that appeared on a roll of film after processing photographs from Hoyerswerda, a town in former East Germany with a history of xenophobic attacks against foreigners. Monument is the rear view of a sculpture that once stood outside the National Museum in Stockholm.

The navigation of bodies in space is central to the reading of the two video works in the main exhibition space. How Important is Speed in a Revolution? and Walker Association are both extracts from an on-going visual research framework that considers the presence of the Black, male body in certain political spaces. Shown on opposite walls, one video consists of television footage from the 45th US presidential inauguration with the speeches and performances edited out, while the other – Walker Association – documents the artist’s own interactions with Caribbean men cruising in Prospect Park, Brooklyn. The works are separated by a threshold of red pigment powder that we understand visually as a red carpet. The installation changes over the course of the exhibition by recording the tracks of the visitors.

In a separate screening room, Mostyn shows the video work Altarpiece, which explores the choreography of state control, and the euphoric release that can be triggered in the body under these conditions. The images and audio recordings have been gathered over four years, tracing links between presidential ceremonies in the US and Zimbabwe, J’ouvert celebrations and a story about soucouyant (a shape-shifting Caribbean folklore character) from Trinidad, Malcolm X perspiring, an interview with a Rhodesian soldier, and images of a childhood friend’s first son.

Santiago Mostyn (b. 1981) is based in Sweden but maintains strong ties to Zimbabwe and Trinidad & Tobago, the countries of his upbringing. He has exhibited widely at venues including the 12th Rencontres de Bamako (2019), Institut Suédois Paris (2019), Gothenburg Biennial (2017), Moderna Museet (2016), and Performa 13 in New York. Mostyn co-curated With the Future Behind Us at the Moderna Museet (2018). Mostyn is a grantee of IASPIS, the Swedish Arts Grants Committee. The exhibition is kindly supported by the Berlin Senate for Culture and Europe – Department Culture.