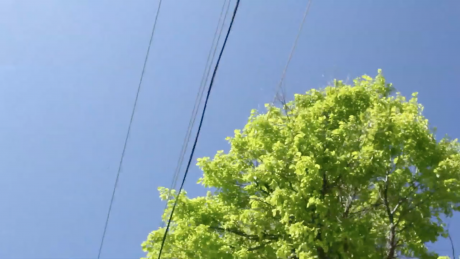 The ground beneath our feet and what it holds is constantly on my mind. In the city called Berlin, the ground is narrated through multiple official histories and timelines. I am continually aware of its holes and slippages – messy and dense, like the swampy saturation of the land itself. In the territory called Treaty 1, the ground is also officially narrated through colonial means, so that Indigenous nations, place names, and histories are announced as unofficial and past – as if they could be sedimented and flattened, like the limestone layers beneath the soil.

The country called Canada transformed this ground into farmland, a colonial grid. I made this video as a line drawing, re-tracing the borders of one section of this grid, a Métis land title in Manitoba, illegally granted to Russian Mennonite settlers in 1874. Pointed to the sky, as to heaven, the camera traces the borders of the small tract of land, reasserting its presence, the religious context of its seizure, and the imposition of colonial concepts of property and theft.

OPEN WINDOW is a series of presentations by the artists-in-residence at Künstlerhaus Bethanien, who currently don’t have the chance to show their work in the usual Open Studios and exhibitions. Their works can be seen from the window front, Kottbusser Str 10 each day. Initiated by Arthur Debert.