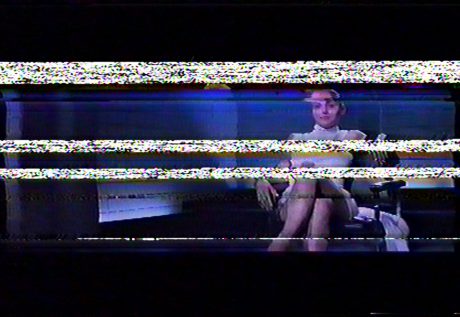 In his found footage work Moritz Frei focuses on one of the iconic moments of cinema. In Paul Verhoeven’s 1992 released thriller Basic Instinct Sharon Stone plays an enigmatic murder suspect and while an interrogation she crosses her legs, exposing her vulva. This scene was discussed controversially and cited numerously, moreover Frei combines it with personal memories from his adolescence: The movie was released on VHS tape after its cinematic distribution and allowed a closer look on the scene, that was visible in cinemas for a split second only. This possibility was widely used in the age of video rental shops and the repetitive playback of this scene had worn down the tape mechanically. So the curiosity of the previous audience had transformed the medium and therefore dissolved its content into ghost images, that furthermore fuelled the myth and his imagination.
Moritz Frei *1978, lives and works in Berlin, Germany.| www.moritzfrei.com

The on-going screening series Phantom Horizons
presents digital as well as analogue works that question the paradigm of linear perspective, seeking for a new kind of “status perspective” [Bedeutungsperspektive]. The latter was a development of medieval painting, in which the size of figures is determined by their hierarchical significance. Extending this approach with deconstructivistic ideas and contemporary possibilities of film creation, the presented works open up multifaceted, unseen horizons.
Curated by Robert Seidel | www.robertseidel.com