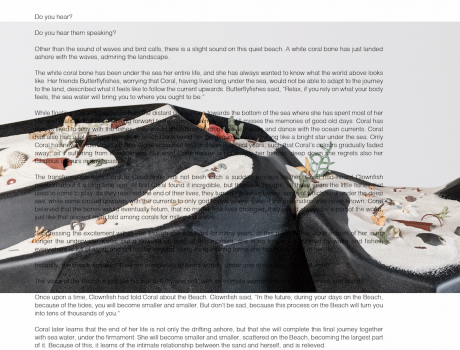 In her site-specific installations, Yang Chi-Chuan employs storytelling to explore relations between people, places, objects and events. In past works, she has mined her own memories to create site-responsive sound pieces that draw connections between her own personal history and the exhibition space, but more recently she has turned to myths and fables, using these traditional forms of storytelling to address contemporary issues. For Plastonki, Yang has created a new audio work that looks at the disruption modern industry has made to the natural world through the eyes of non-human actors. Mixing fact and fiction, science and myth, the exhibition’s title refers to the story’s emponymous main character who represents not only petrochemical products but also a new species. Alongside this recording, Yang has produced a series of handcrafted ceramic works, which take their shapes and colours from climbing gyms and discarded items of trash, showing the myriad of ways these long-lasting products have infiltrated our lives. As the artist says, “Plastonki represents new knowledge and possibility but also an evil force.”

Yang Chi-Chuan would like to thank Prinzessinnengarten Kreuzberg / Common Grounds e.V for their support.