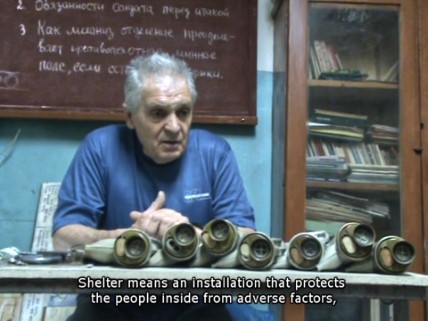 Originally conceived as a 2-channel work, Mykola Ridnyi’s short films were made 10 years ago, before the Ukraine conflict in 2014 and the Russian-Ukrainian war since February 2022. Their video footage preserves locations that capture the complexities of Ukrainian history in personal vignettes and resonate with current events.

The setting in the first film, “Shelter,” is a bunker in Kharkiv that has been converted into a kind of military school. The narrator, an almost 80-year-old teacher, does not seem to be interested in the current political situation, but remains true to his Cold War-influenced principles. His students are less enthusiastic about patriotism or propaganda than about shooting ranges and weapons, which until then they had only known from computer games and Hollywood action films. For “Father’s Story,” Ridnyi’s father gives a tour of the basement of the former family home, pointing out objects left behind, such as jars of preserves, home-brewed alcohol, and old newspapers, which provide a nostalgic look back at his Soviet childhood and reflect the constant political as well as social change in Ukraine, which is imprinted in everyday objects.