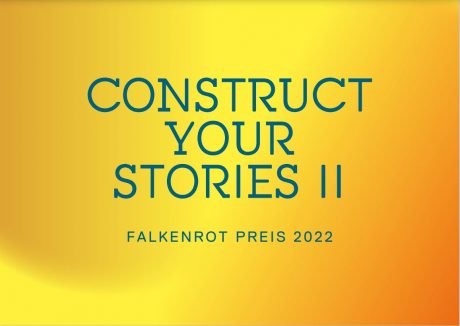 The Falkenrot Prize was established by the Dutch collector couple Astrid and Arie de Knecht in 2005 and has been awarded by Künstlerhaus Bethanien in Berlin ever since. The prize is presented to artists who develop their own distinctive ideas and forms of expression, defining their positions on the basis of original criteria.

In 2021 the award and associated exhibition had to be cancelled due to the pandemic.

The group constellation of the exhibition, “Construct Your Stories 2”, thrives nonetheless on the promises of a strong “I”, fading out the hallucinations of the globalized “we”.

In her video works and performances, Tamy Ben-Tor plays various characters that she herself has invented. Frequently, she uses simple items of costume or other devices to create tragicomic personalities. Humour is an important element of her work, and she applies it to explore and illuminate issues of identity, politics and society, as well as cultural stereotypes. Self-critically, she grasps her artistic perspective in terms of mind-expanding actions with a “sponge that soaks up all the contemporary muck”. Tamy Ben-Tor has performed with great success at performance festivals worldwide. Her work can be found in the collections of the Whitney Museum of American Art, New York; the Pérez Art Museum Miami; Tel Aviv Museum of Art; the Israel Museum, Jerusalem; and the American University Museum, Washington D. C.

Winfried Bullinger, born in Munich, Germany in 1965; lives in Berlin.

At a time when global discourse revolves around sustainability, the buildings in Winfried Bullinger’s series of images show us the ‘radical local’. There is nothing whatsoever  superfluous about them. The photos show evolved building typologies, which generate their own language of form using construction materials that are available locally in each case. This vernacular architecture is understood as ‘architecture without architects’, that is to say – these are buildings that have emerged from their conditions of use, the local materials, the necessary durability, the climatic micro-conditions, and finally also the preferences, experiences and economic possibilities owed to the tradition of each individual sociological group. The buildings often follow construction patterns that have been tested for housing by a group for centuries. It is the wealth of invention that we are made to marvel at in Winfried Bullinger’s photographs.

For more than a decade, Winfried Bullinger took his pictures in the countries of South Sudan, Sudan, Ethiopia, Chad, Kenya, Uganda, Tanzania and the Central African Republic using a large-format analogue camera. In the exhibition, he opens up his archive and enters into a dialogue with his project partners Fethi Yahya (Ethiopia), Musa Magumba (South Sudan), and Abdelkerim Oumar Kande (Chad).

Silvina Der-Meguerditchian, born as the granddaughter of Armenian immigrants in Buenos Aires, Argentina in 1967; has lived in Berlin since 1988.

Silvina Der-Meguerditchian’s work addresses the burden of national identity, the role of minorities in society, and the potential of a social “in-between”. She is interested in the impact of migration on the urban fabric and its consequences. Reconstructing the past and establishing archives are a common thread of her artistic research. There is a multidisciplinary orientation to her work, which combines different media.

Since 2010, she has been the artistic director of Houshamadyan, a project for the reconstruction of Ottoman-Armenian town and village life (www.houshamadyan.org). In 2014/15 she was a fellow at Tarabya Cultural Academy, a residency programme run by the German Foreign Office and the Goethe Institute in Istanbul. She also participated in the Armenity exhibition in the Armenian Pavilion at the 56th Venice Biennale, which was awarded the Golden Lion for Best National Contribution in 2015. Her works have been shown worldwide, including in Germany, Argentina, the USA and Turkey.

Jean-Ulrick Désert, born in Port-au-Prince, Haiti in 1960; lives in Berlin.

The artist’s œuvre encompasses works of painting, sculpture, objects, posters, videos and actions. His work stems from a tradition of conceptualism that explores social and cultural practices. Désert is known for his provocative and poetic projects such as his first installation in Berlin, The Burqa Project: On the Borders of My Dreams I Encountered My Double’s Ghost (2002). He himself characterizes his practice as a visualization of “conspicuous invisibility”. Jean-Ulrick Désert has exhibited at the Grand Palais, Paris; Brooklyn Museum, New York; Studio Museum of Harlem, New York; Galeria Sztuki Współczesnej Bunkier Sztuki, Krakow; Haus der Kulturen der Welt, Berlin; Savvy Contemporary, Berlin; and numerous other institutions in Europe, America, and Africa. In 2019, he was Haiti’s official representative at the 58th Venice Biennale.

Šejla Kamerić, born in Sarajevo, Yugoslavia (now Bosnia and Herzegovina) in 1976; lives in Sarajevo and Berlin.

Šejla Kamerić survived the Bosnian War and the siege of Sarajevo. Primarily, she is interested in paving the way for any form of universality by means of films, concepts, actions, emancipatory installations, all of which are directed unabashedly against repression and exclusion, often in public space. Her confrontation with dominant ideologies exposes the demarcation lines between power and impotence, and questions those supposed certainties and prejudices that inhibit the respective fields of politics, knowledge, and art. In the process, the drastic nature of her themes often contrasts with the subtlety of her chosen materials.

In 2000, Šejla Kamerić participated in Manifesta 3: Borderline Syndrome, Ljubljana, where she showed the installation EU/Others, which brought her sudden fame. In addition, her works have been shown in numerous art institutions, including in Frankfurt am Main, Innsbruck, Vienna, Gothenburg, Stockholm, Paris, Zagreb, Graz, London, Barcelona, Ljubljana, Belgrade, Sharjah, and Vilnius, as well as at the 15th Sydney Biennale (2006), the Gwangju Biennale (2012), and as part of the controversial 4th Berlin Autumn Salon at the Maxim Gorki Theater, Berlin (2019). In 2007, she was a fellow of the DAAD’s Berlin Artists’ Programme. Kamerić has presented successful solo exhibitions at Arter – Space for Art, Istanbul (2015), and at the National Gallery of Kosovo in Pristina (2015). Her short film What Do I Know was screened at the Venice International Film Festival in 2007 and at 40 other film festivals worldwide.

Melody Melamed completed her BFA in design / media arts at the University of California, Los Angeles in 2008. To pursue her education, she moved to New York, where she completed an MFA in photography, video and related media at the School of Visual Arts in 2013. Her work focuses primarily on aspects of gender identity – specifically, on the female form and perceptions of women in society. Her continuing goal is to create aesthetically exceptional as well as conceptually compelling images. The subjects of her personal as well as editorial work exude a raw, intimate and powerful sense of self.

As a freelance photographer and multimedia artist, she has worked internationally with pop musicians, art directors, stylists, and advertising agencies, such as VOGUE (Germany) and Philosophie Magazin in 2019/20. Her photographs are also featured in the photographic book New Queer Photography by Benjamin Wolbergs (Verlag Kettler), published in 2020.

At the age of 17, he came to the former GDR on the basis of a student scholarship in order to study geodesy.

The main theme of his artistic installations, which he sets out specifically for each space, is the life of working youths in Ethiopia. At Künstlerhaus Bethanien he shows an arrangement of hundreds of shoe-shine boxes from Ethiopia and makes himself available as a communicator. As a contemporary witness, he offers to inform people about some of the lives led in his homeland, and to enter into conversation with anyone who is interested.

In 2003 he founded the association Listros e. V. to support children and young people in Ethiopia through versatile projects of national and international impact. Artists and architects have joined him, realising forms of intercultural cooperation in various art and exchange projects.