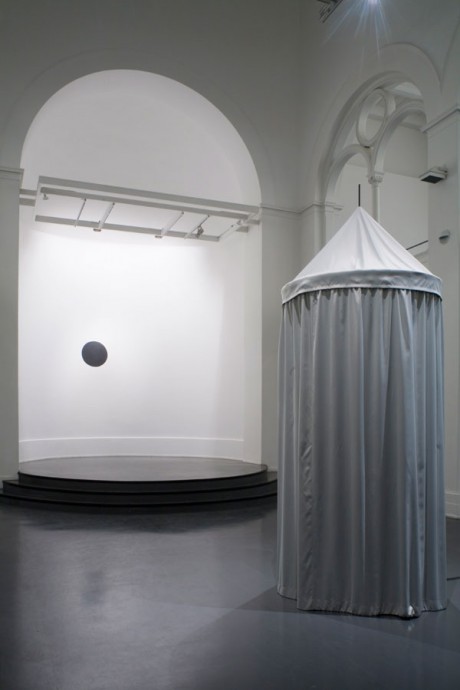 “In the past, Ralf Ziervogel has been known for his sharply detailed, imploding and exploding apocalyptic drawings in outsized and mini formats. The spatial installation “Equilibrist” is inserted into the given space – the former chapel of Bethanien Hospital and now Studio 1 of the Künstlerhaus – in a strict, minimalist way. An almost corporeal “UD” model construction (2007, 384 x 150cm, mixed media), the striking apparatus under grey tarpaulin, and a blind spot, deep black and matt – pure black ivory -, are located in the apse. The room reflects an arena as object space. There is distance to everything. Randomly, the tent interior rushes outwards to create plastic forms. Bud Spencer and Achilles seem to be standing on a tortoise. The black hole in the apse represents the drawing together of interior space, the opposite of the tent. The question of outside and inside, of the causal agent, of the empty space of a higher being is posed without pathos.” (Peter Lang, curator)

“Equilibrist” is being realised with kind support from the Governing Mayor of Berlin, Senate Offices – Cultural Affairs.