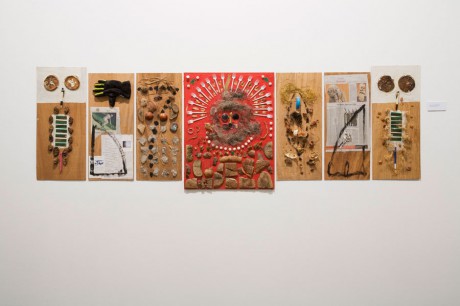 People are always talking about Leipzig because of Neo Rauch and the “New Leipzig School”. But the Leipzig School of the 80s also formed roots in the field of alternative concepts, intermedia activities and an expressive – tending towards the abstract – formal language in painting. This is evidenced by events like the foundation of an intermedia workshop initiated by Hans-Joachim Schulze (1979), performances by Schulze’s “Gruppe 37,2” (as from 1982), or the “Leipzig Autumn Salon” (1984). The exhibition of Hans-Joachim Schulze’s current pictures aims to shed new light on this chapter of Leipzig tradition.

Schulze – who fulminated during his studies at the Leipzig College of Printed Graphic and Book Art against “conforming, colourless sods” and called for the permanent breaking of taboos and border-crossing between art, music, performance and theory – employed the seductive power of words to lecture for hours on work and freedom, or ownership and social flow, usually developing impressive schematic drawings to illustrate his points. In 1981, he completed the course with something that his professors did not wish to see appraised or made public: a workroom filled with more or less finished systematic drawings, pictures and photo documentation of his actionist practice. Political upheaval in 1989 marked the onset of an enduring artistic investigation into fundamental social questions, which he made into the subject of several large-scale work cycles.

The cycle “Göttinnen und Götter (Goddesses and Gods)” shows almost all the works that Hans-Joachim Schulze has painted on the subject since 1989, some produced in collaboration with other artists. They are portraits of real people, whose essence the artist has attempted to capture in the image. The exhibition seeks to create a cosmotheist viewpoint, in which the female and the male are seen alongside one another as opposing forces (“Yin” and “Yang”).

The INNENSASSINNEN INSOLVENZ ORCHESTER, a group of improvising musicians with fluctuating membership, will play at the opening on 21st February.
In addition, Christian Schmidt-Chemnitzer plans to realise an ice-performance in the foyer of Bethanien between 7.30 and 8.30 pm.