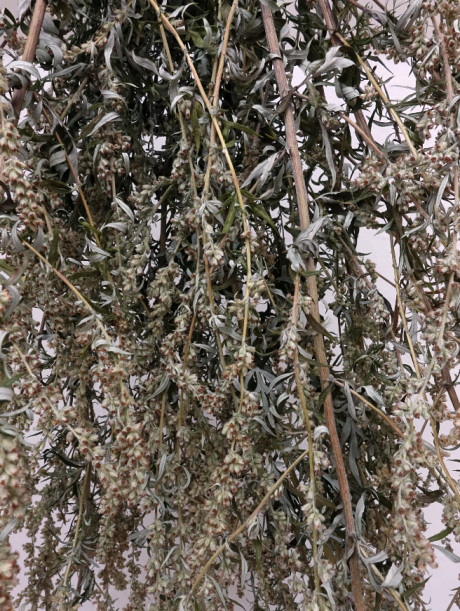 At the center of Lauryn Youden’s exhibition are two wall-mounted altars, each measuring just under four meters long. Filled with dried flowers, medicine, herbs, books, candles, and ritual-based objects, the content of these altars documents the survival strategies she has developed to navigate an ableist world. Visionary of Knives is a space of retreat and rest but also education and protest. Originally conceived as a meeting place for a queer Crip¹ community, it has become a place of absence due to Covid-19, mirroring the physical isolation often experienced by people with disabilities. Drawing together Youden’s care practices, and her personal collection of literature and zines made by other Crip queer artists, healers, writers and thinkers, the exhibition is an invitation to encounter a space dedicated to Youden’s care and the discourses of her community.

In this time of a global pandemic, as the majority of able-bodied people are confronted with a Crip reality for the first time, these discourses hold a new resonance. Youden invites us to learn from the wisdom of the sick and disabled community as we learn to live in a world where access is limited, and disease and illness are a constant threat.

¹Crip is a term many people within disability studies and activist communities use not only in reference to people with disabilities, but also to the intellectual and art culture arising from such communities. Crip is shorthand for the word „cripple“ which has been (and is) used as an insult toward people with disabilities, but which has been re-appropriated as an intra-group term of empowerment and solidarity. An early proponent of crip’s social and political potential, Carrie Sandahl (2003) describes crip as a „fluid and ever-changing“ term which „ expanded to include not only those with physical impairments but those with sensory or mental impairments as well“. (for further Information: Alison Kafer: Feminist Queer Crip, Indiana University Press, 2013)

Lauryn Youden *1989 in Vancouver, lives and works in Berlin and Vancouver. She is a founder and co-director of Ashley Berlin and organizing member of Sickness Affinity Group (SAG). Upcoming screenings and exhibitions include the film program PRESENTS at Haus der Kulturen der Welt and Next Waves Theater at the Roter Salon, Volksbühne. In 2021 her work will be included in the exhibition Kosmos: Emma Kunz at Aargauer Kunsthaus as well as in The Archive Show at the E-WERK LuckenWalde. The exhibition is part of the cultural program related to Canada’s Guest of Honor presentation at the Frankfurt Book Fair and is supported by Canada Council for the Arts and the Government of Canada.