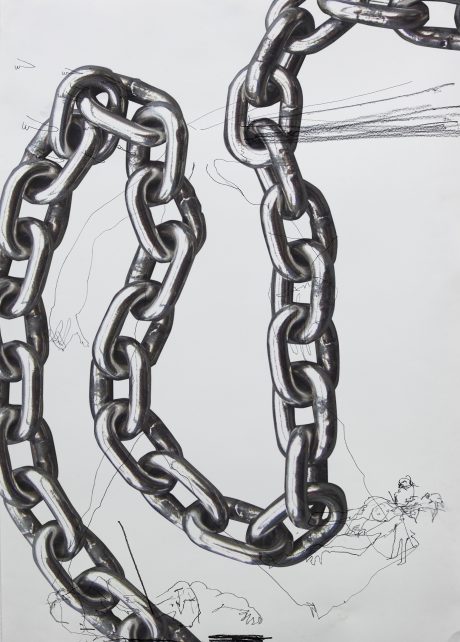 Secrets alone do not produce images. Only an inward search – an intensive examination of the self and its positioning in the world – makes a new symbolic language possible. The drawings of François Lemieux (b. 1979 in Québec, Canada) are the product of such introspection. Fed by images of political and social violence conveyed through television, the Internet, social media and magazines, an archive of atrocities builds up in our collective memory. There it also influences the way we see the world, how we act and how we treat each other. Blindfolded, Lemieux lets all the recollections of the images that rain down on him day by day bleed onto the paper or directly onto the wall. This results in forms that can be assigned more or less clearly to specific events. Often it also produces abstract psychograms whose nervous strokes merely hint at the underlying horror. Lemieux is not interested in purely reproducing these media images, but in developing a new, subjective formal language for the propaganda vocabulary of fascist regimes.

In one of his sound sculptures, Lemieux lets an organ chord vibrate through the exhibition space by means of a tubular construction. Listening to the sound, which is not tied to a melody, we are reminded of the sacral mood of a church service – a gathering of people for the purpose of communing with God, of making sacrifices, receiving sacraments or simply fulfilling a mandatory religious duty. Religious services often follow a rite that is predetermined by tradition or prescribed by a spiritual authority, such as the liturgy of the Catholic and Orthodox Churches, or the Protestant order of service. However, depending on their purpose, spontaneous or loosely structured gatherings are also referred to as worship. This is what best describes the situation of the visitors in Lemieux’s exhibition. The ‘heavenly’ sounds of the organ turn the exhibition space into a holy place. Moving through it aimlessly, looking for an object of devotion, one notices that the sound of the chords changes depending on one’s position in space. Through this sculptural sound work, Lemieux points to the boundary and the threshold between subjective and collective experience. Liturgy and propaganda produce images and icons that are transformed into a very personal language through introspective perception and confrontation.