another Exhibition
When all else fails, try Love 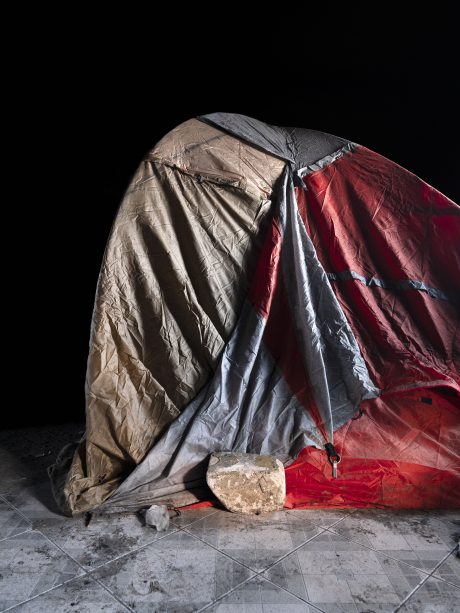 The work of Lisa Kohl (b. 1988 in Luxembourg) can be understood as a conglomerate of digital media, installations, field research, documentation, staging and narration. Her artistic excavations revolve around the ephemeral, the absent and the imaginary. Aesthetic phenomena of absence, migration and situatedness play a central role in her work. In the field of tension between material presence and actual events on the one hand, and the realm of the possible, the fictitious and the invisible on the other, she finds near-endless artistic possibilities to merge both instances into simulations.

The video THE GAME (Bihać | Bosnian-Croatian Border | 2022) highlights the struggles of migrants through the aesthetics of gaming. Escape routes are shown on a smartphone from the perspective of a young Afghan man. The device is reminiscent of a VR game console. In the voiceover, the protagonist can be heard describing the different forms of escape and pushbacks that he personally experienced. A subtle sense of menace and tension underpins his account.

The photo series BLINDSPOT (Bihać | Bosnian- Croatian Border | Calais | France | 2022) metaphorically embodies the presence of the absent and the visibility of the invisible. The elements it depicts, such as the shelter, the mihrab carpet and the body cast, symbolically allude to the notion of refuge and the appropriation of anonymous spaces of living and
prayer. The sacral mood here refers to belief and hope in relation to identity and strangeness, intimacy and home(lessness).

The series HALIDOM (Canary Islands | Spain– North Africa | 2022) represents sainthood on an iconographic level – as a pictorial metaphor for life and death, presence and absence, limitation and expanse, height and abyss. Sculptural figures in barren areas and border zones become symbolic monuments and representatives of the unseen. The veil is synonymous with concealment, protection and camouflage. The relief and the folds of the cloth suggest notions of divinity, heroism and inviolability. This series confronts us with spaces of transition – an allegory for the longing for freedom and redemption.

The video installation ACROSS (2022), created during the artist’s stay at Künstlerhaus Bethanien, confronts us with brutalist window architecture and a view of a vast sky lined with dissolving clusters of clouds. Concrete and air – these two materials could not be more different and yet here they form a harmonious entity that calls to mind countless images, from medieval Annunciations to window depictions in German Romanticism and famous film scenes. They all have one thing in common: the window serves (in various ways) as a threshold between this world and the hereafter that not only separates the two but also establishes a contact between them.
The artwork was created in collaboration with the sound designer Sören Schenk.