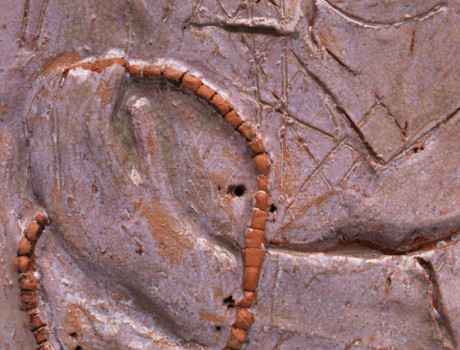 Initiated in 2005, the Falkenrot Prize is being presented for the eighth time this year. It is conferred upon contemporary international artists whose outstanding self-awareness is destined to establish new standards and reset media boundaries. The Falkenrot Prize 2014 has been awarded to the artist Michaela Meise (born 1976), who lives in Berlin.

In her exhibition for the Falkenrot Prize 2014 Meise is showing her newly produced series of works entitled Mothers – ceramic portraits of mothers, to which she was inspired in exchanges with other artists and through her own interest in the theses of feminist psychoanalyst and cultural theorist, Luce Irigaray: “I began with the portrait of my own mother, working entirely from my memory and imagination. To my surprise the face that emerged seems to be quite close, as if bending down over me. There were also small scenes at the edge, showing how my mother played out in the streets with other children as a child, as well as an aerial photo of the war-devastated city in which she grew up, and lavender, which she loves so much. Rather than her name, I had inscribed “my mum” into the clay.” (M. Meise)

This exhibition by Michaela Meise is supplemented with selected works by painter Kate Diehn-Bitt (1900–1978), who developed a completely unique and unconventional pictorial language. Meise has made a thorough investigation into her work and rates it extremely highly. The exhibition also includes Meise’s work Diehn-Bitt Frieze.

We would like to thank the lenders who have enabled us to realize the exhibition in Künstlerhaus Bethanien:
Inge Jastram, Johann König, Kunsthalle Rostock, Ursula Schael, Staatliches Museum Schwerin/ Ludwigslust/ Güstrow, STANDARD, Oslo.
Particular thanks are due to Michael Schultz, Berlin.
With kind support from the Governing Mayor of Berlin, Senate Chancellery – Cultural Affairs.