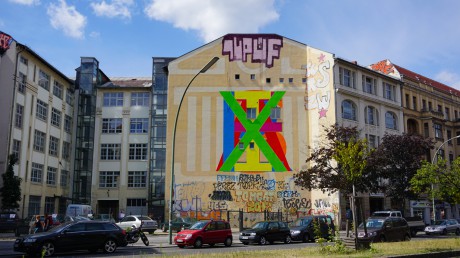 Besides Das mechanische Corps, the focal project of our anniversary year is the artistic design of the firewall at Kottbusser Str. 10, ceremonially opened on 21st August.
As the result of a closed competition, a design by Israeli artist EREZ ISRAELI was recommended for realisation.
Israeli’s idea centres on the subject of memory and remembrance in the Jewish-German context, but does not present the component of memory using the customary means for this theme; he avoids pathos by integrating tendencies of Street Art, for example. Israeli’s mural painting action will restore its name to the building. In the course of anti-Jewish measures, the Nazis had removed the names of famous Jewish businesses from house fronts. Following the names of Jewish entrepreneurs, it was the Jews themselves who disappeared. This is the basis for the conceptual idea behind Erez Israeli’s powerful artistic design.

“I will write Felix Israel’s name on the house facade. Letter for letter. Eleven in total number. The letters will not be placed next to each other but will be painted upon each letter. Hereby every letter covers and erases the letter underneath. In the process I will begin with the surname Israel that combines the entirety and will end with the name Felix, referring to the individual, the subject. The final result is a picturesque almost abstract letter-structure from which the names cannot be deduced at first sight. The last two applied letters that emerge from the letter-continuum are the letters I and X, the X basically removing the I underneath it – the self and together the whole building. The act of retaining and erasing a name brings to mind the subject’s extinction while becoming a symbolic act together with the building’s disappearance and giving this mural its meaning.” (Erez Israeli, project proposal)

Video documentation: the making of the firewall mural
www.youtube.com