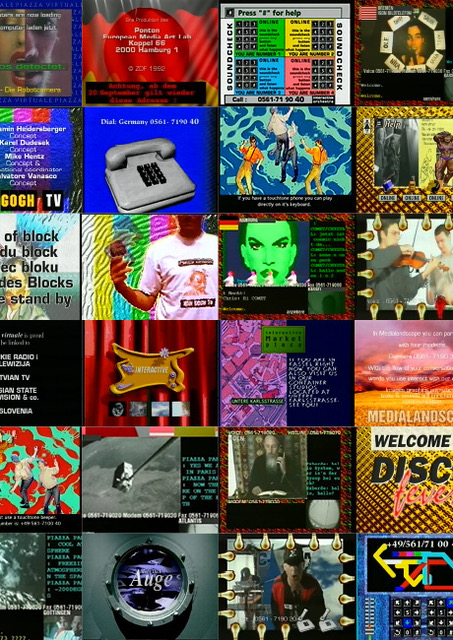 “Piazza virtuale” by the artists’ group Van Gogh TV was not only the biggest art project ever to have been on TV – from a contemporary perspective, the project was also a precursor to present-day social media. The ground-breaking television event, which took place during documenta IX in 1992, was a TV experiment in which users could create media content themselves.

Van Gogh TV not only developed its own highly innovative technology for the project, but also conceived design and broadcasting concepts for interactive television, in which the consumers were to become producers of content. Many of these ideas are put into practice on the Internet today.

For the first time now, Künstlerhaus Bethanien is presenting the material remaining from that large-scale art project in an exhibition. Original works, video recordings, sketches, plans, photos, and other historical material will be on view, alongside technical relics of “Piazza virtuale”. The presentation will be accompanied by a series of works by other artists that contextualize what is being shown.

In keeping with the theme of the exhibition, “Van Gogh TV: Piazza virtuale” combines objects in physical space with the project’s presentation on the Internet: on the one hand, there is the virtual exhibition piazza-virtuale.common.garden; on the other, a website that documents the research project in detail (http://vangoghtv.hs-mainz.de/).

The artists of Van Gogh TV will attend the opening weekend (Nov. 12-14) and will stream talks, performances, lectures and chance encounters via the websites of Künstlerhaus Bethanien and the Heinrich Böll Foundation, which is supporting the programme.

The exhibition emerged from a research project on “Piazza virtuale” conducted by Mainz University of Applied Sciences and the University of Bonn, and supported by the German Research Foundation (DFG). The book “Van Gogh TV’s “Piazza Virtuale”. The Invention of Social Media at documenta IX in 1992″ (https://www.transcript-verlag.de/978-3-8376-6066-1/van-gogh-tv-s-piazza-virtuale/) by project director and curator Tilman Baumgärtel is being published by Transcript Verlag to accompany the exhibition.

based on a resolution of the German Bundestag

In cooperation with the