amongst others with Roland Boden, Via Lewandowsky, Nasan Tur, Simone Zaugg 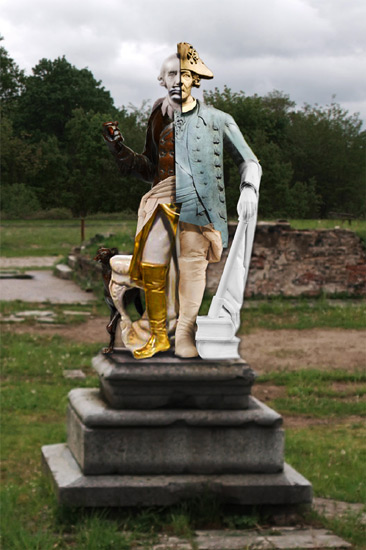 After his attempt to escape Prussia, Crown Prince Friedrich was detained in Kostrzyn Castle by his father Friedrich Wilhelm I from 1730-1732. On 6th November 1730 the King had the prince’s friend Hans Hermann von Katte, who had tried to help him escape, beheaded before Friedrich’s eyes.

The former fortress in which the castle was situated has not yet been adapted for tourists; it is in an interim position – outside the city of Kostrzyn, but directly on Poland’s national border. Eleven international artists have implanted site-specific artworks into the ruined, former fortress of Küstrin (today Kostrzyn nad Odrą). These are unusual sculpturally, with the character of reminders.

A cooperation between the Kulturland Brandenburg e.V., Künstlerhaus Bethanien GmbH, Berlin and the Fortress Museum Kostrzyn.

A project in the context of Kulturland Brandenburg 2012 “COME TO YOUR SENSES! Friedrich the Second of Prussia” (KOMMT ZUR VERNUNFT! Friedrich der Zweite von Preußen)