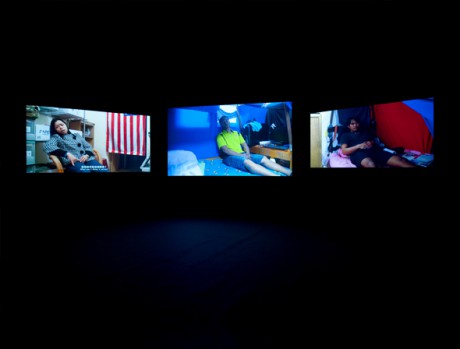 Chia-En Jao’s artistic practice is expressed in experimental series, which explore ideas of identity, borders and collective experience, and also fathom the relations of power under different aesthetic and political regimes. The works resulting from such study – mainly videos, project-based installations, light and video projections – often involve the viewer as an actor within a concept that the artist has developed by starting out from personal experience. In the exhibition Xeno-epistemics Jao presents the 3-channel video projections Statement and REM Sleep.
The videos in Statement show statements that Jao has collected from Taiwanese artists from different generations. He uses the artist’s statement, the customary form in which an artist influences the reception of his/her work, in order to generate entirely different, disturbing associations; he does so by getting unknown passers-by or the exhibition visitors to embody the relevant artists verbally, putting the artists’ words into their mouths: with the help of such re-enactments Jao makes clear how the meaning of art is created through its linguistic and performative aspects, as well as highlighting the differences between artistic and everyday language, and changes in their use and terminology over the course of time.
REM Sleep examines the divisive as well as shared elements between people of different origins from the standpoint of individuals who have been forced out temporarily from their familiar social context – a theme for which Jao has developed a particular sensitivity. In REM Sleep, made in Taiwan, the artist interviewed guest workers with a wide range of nationalities about their wishes and dreams. Thereby, he made the interesting observation that despite their different formative cultural backgrounds, the interviewees’ personal ideas and dreams while living in a strange country become essentially closer, and mental borders are dispelled.

Chia-En Jao is a grantee of the Ministry of Culture, R.O.C. (Taiwan) in the context of our International Studio Programme, with kind support by the Representation of Taipei in the Federal Republic of Germany.