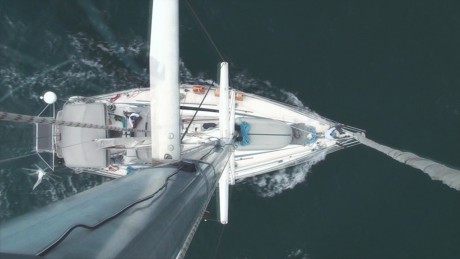 Bravo-Radio-Atlas-Virus-Opera, 2009-10; Video record of the navigating hours of a trans-oceanic crossing of the Panama Canal, in Atlantic-Pacific direction, realized between 5PM on June 27 2009 and 1PM the following day; and painting on wall; duration: 10h45'; Captain: Matias Eli; Edition: Tomaz Klotzel; video-still

It’s not easy to define a common ground to my artistic practice. There are some recurrent subjects, even some obsessions that permeate my research. But the matters I am interested in can be detected in different contexts and assume different forms. My practice is thus characterized by a flexible usage of medias and strategies that vary according to the needs raised by each project.

In a general way, though, there is an approach that can be seen as a common denominator, something I would call ‘displacement operations’. The idea of displacement can take a more literal aspect, as it happens in works like “Percurso otico” (in which the image of a painting is relocated by means of a mirror game) or “BRAVO…” (in which my own dislocation is central to the construction of the video). But displacement can also be understood as disturbance, by proposing approximations between different objects or situations; or by slightly changing characteristics of familiar elements in such a way that these moves create new meaning. This kind of detours or deviation can be seen, for instance, in “Jogo transparente”, a set of transparent playing cards with which one can play any known game (or any invented one) excluding the possibility of bluff.