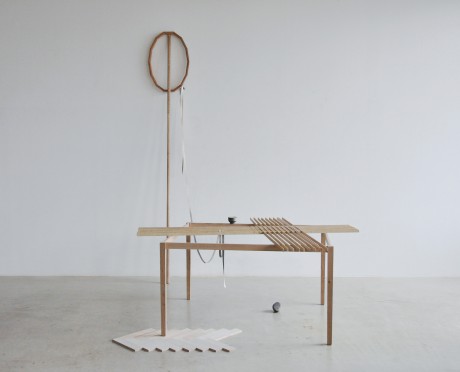 Shifting to and fro between functionality and abstraction, my work deals with various “actions and processes” ― natural dynamics, human behavior patterns toward materials, and physical phenomena occurring within the medium, the form, and the work itself. Sculptural structures of my work first evoke the viewer’s recollection, because they seemingly resemble chairs or tables, or furniture fragments such as wooden grids or frames, but then deconstruct the memory because their functionality is oriented toward disappearance and oblivion. Thus, a situation is created, where the existence of things is only defined by the materiality of the presented object and the viewer looking at it.

In some of my work, repetition functions as a process leading to oblivion of self in a way similar to how letters start to appear just as black lines when one would write the same word again and again with a pencil on paper. As a result of the concurrence of paper and graphite, the repeated letters unfold a world where two different states run in parallel. Treating the autonomous actions that occur in-between self defined by things, and things defined by self, as anonymous techniques, my work is an attempt to unfold and interpret this double world, which oscillates between perpetually-repeated recollections of things and oblivion of formulas or self.