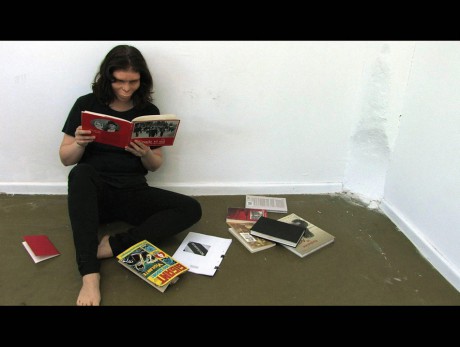 In her drawings, installations, performances, and videos Ylva Westerlund explores various scientific models of knowledge. By assuming alternate roles she switches between the artist-as- researcher to the subject of study itself. Westerlund’s work is influenced by her interests in social studies, post-structuralist feminism, and monsters. In the exhibition Evolutionary throwback Ylva Westerlund weaves a visual net, which oscillates between the past, present, and future of human evolution. Inspired by a visit to Berlin’s Natural History Museum – Leibniz Institute for Research on Evolution and Biodiversity and their displays of casts representing homo sapiens’ ancestor australopithecus anamensis, who has been extinct for four million years. Westerlund developed a complex multi-media installation presented as subjective scientific research. A part of it is her video Evolutionary throwback (2012). A plaster cast of the artist’s face as an australopithecus anamensis helps the artist to transform into a fictional creature, a mixture between homo sapiens and australopithecus anamensis, evoking notions of the art activist group Guerrilla Girls.

Ylva Westerlund, was born in Husum, Sweden in 1975. She lives and works in Berlin and Malmö, Sweden. Her works have been exhibited, among other venues, at Centro Cultural Montehermoso in Vitoria-Gasteiz, the Living Art Museum in Reykjavik, and Bonniers Konsthall in Stockholm.

Ylva Westerlund is a grantee of the International Artists’ Studio Programme in Sweden (IASPIS), Stockholm.