(Queer) Feminist Manifestos since the Suffragettes 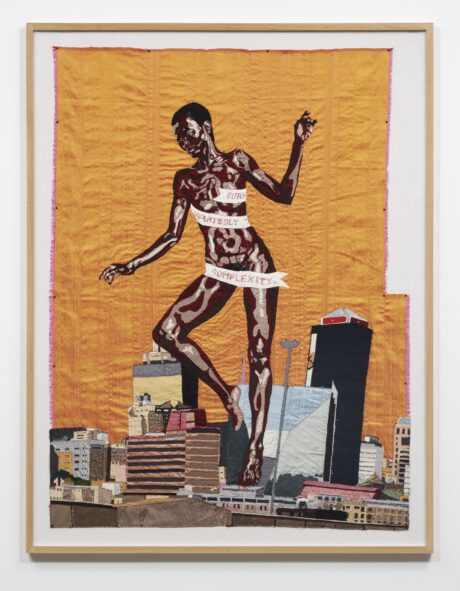 ‘We will never be quiet again.’ – Suffragettes
‘Use the F-word. Be a feminist.’ – Guerrilla Girls

MANIFEST Yourself! is an appeal and an empowering hymn to the (queer) feminist manifesto as an integral part of an ongoing protest culture and a medium of expression frequently used in contemporary art and culture. Recent events, such as the protests in Iran following the violent death of Mahsa Amini, who according to the morality police was not wearing her headscarf “decently”, the curtailment and criminalisation of abortion in the US, the war of aggression against Ukraine waged by the male autocrat Vladimir Putin and nationalistic-chauvinistic tendencies inever more countries have highlighted the urgency of women*’s, trans and non- binary people’s struggles for everyday and fundamental rights. For over a decade, the visionary punk band Pussy Riot have been facing persecution and imprisonment for alerting the world on human rights violations in Russia and, more specifically, the threat posed by Vladimir Putin. In 2019, the song and participative street performance Un violador en tu camino by the Chilean feminist theatre collective LASTESIS kicked off a wave of protest that swept over the borders of the American continent.

In the face of persisting social stigmatisation, professional discrimination, gender pay and data gaps, domestic violence and femicide more than a century after the emergence of the first major women*’s movements – the suffragettes in Great Britain and the USA – it appears that women*, trans and non-binary people are still politically and socially heavily disadvantaged compared to men*. Against this backdrop, we witness a constant stream of new (queer) feminist manifestos as emblematic statements, in which anger, critical dissent and calls for structural transformations and equality find an explicit form of expression. Their demands resonate on the streets and in song lyrics, appear on posters and in books, and go viral on the Internet. The common element that unites them is a demand for empowerment and self-affirmation. Thanks to their distinctive linguistic and formal characteristics, combined with a fascinating scope of themes and individual perspectives, manifestos form a central element of feminist art history in the twentieth and twenty-first centuries.

The exhibition MANIFEST Yourself! retraces the development of (queer) feminist manifestos through a selection of public, often politically motivated statements issued by women*, trans and non-binary people in different contexts. These various feminisms have evolved from the white and academically influenced beginnings of the 1960s and 1970s towards an inter- sectional understanding: besides categories such as biological sex and gender identity, age or (dis)ability, and class or religious affiliation, experiences of discrimination caused by segregation, colonial power structures or late-capitalist work conditions are increasingly coming into focus. In parallel with the #MeToo movement, which in recent years has led many prominent women* to express their dissent collectively, Black Feminism has gained a noticeable presence in society as a whole, amplified since 2013 by the #BlackLivesMatter movement. The detrimental objectification of the natural environment is also increasingly reflected in feminist manifestos, as ecological awareness and criticism of predominantly male-coded destructive violence and hubris are gaining ground. At the same time, more and more influential statements by women*, trans and non-binary people are emerging in techno- and cyberspace – from cyborgs and technoid slime to Glitch Feminism.

The exhibition MANIFEST Yourself! aims to demonstrate the unabated vitality of (queer) feminist manifesto culture since the suffragettes and reflect its variegated, sometimes contradictory aspects. To do so, it surveys different regions, cultural contexts and media. For the first time, it includes manifestos in the form of texts, sculptural objects, installations, soundtracks, videos and performances, as well as documents on the history of feminist manifestos. Numerous manifestos will be made accessible in a research lounge and in the publication accompanying the exhibition. The cooperation partners alpha nova & galerie futura, re.act.feminism e.V., the Academic Network of Eastern Europe e.V. as well as Elena Zanichelli (Mariann Steegmann Institut | Kunst & Gender) and students of the University of Bremen are planning the presentation of their own projects in dialogue with the exhibition theme. On the opening night, FRZNTE and luïza luz will realize a Pole Sound Performance developed for MANIFEST Yourself!

Kindly supported by State of Berlin – Senate Department for Culture and Europe and LOTTO-Stiftung Berlin.