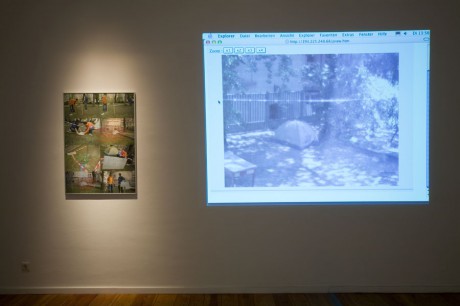 Kornél Szilágyi, currently a guest at the Künstlerhaus, is more than just an experimental filmmaker, teacher and musician. The exhibition also offers space to the founder of a state. For in 2005, Szilágyi and his fellow student Tamás Blaha founded the state of “Autonomia”, an area of 30 square metres situated behind the Academy of Art in Budapest and demarked by police barrier tape. Throughout the full duration of the exhibition, it will be possible to see a live streaming from “Autonomia”. After all, this territory – the whole of which lies within the recording area of one security camera – is the smallest state in the world to be kept under complete surveillance. On the evening of the 21st June, the Berlin public will thus witness an exhibition opening that is taking place simultaneously in the tiny autonomous state.

On the basis of posters, photos and texts, Szilágyi also documents a long-term project that has been realised for one and a half years now. During that time, the artist has advertised in various places in an attempt to engage people to act as his alter ego. On the basis of the information given in the applications, Szilágyi reflects on the meaning of the concept of the alter ego and the very different notions that people have of it. Naturally, various experimental Super 8 films can also be seen in the exhibition.