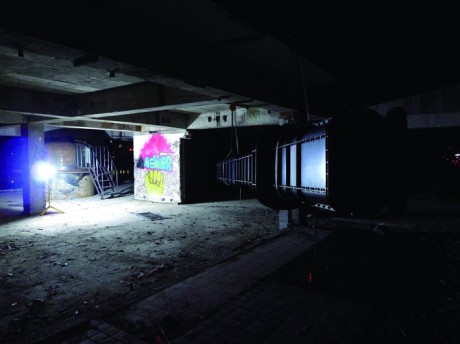 Kijin Park creates installations characterized by a narrative quality. Each work recounts a personal journey and the experiences it offers, which serve as his source of inspiration. The artist processes his thoughts, feelings and experiences in drawings and writing. Park creates a free space for new experiences and narratives with his mainly architectonic, three-dimensional installations, which invite the viewer to interact.
The work entitled Path, links Park’s personal story and the division between South and North Korea, as well as the story of the German division. In particular Park’s personal experiences of military service play a large part here: he was stationed for some time at a military surveillance base in the demilitarized zone to North Korea.
In the first part of the work we see a bridge, broken apart in the middle – forward progress is forbidden, although the possibility is clearly visible. In the second part of the installation on the first floor there is a moveable platform equipped with a projector. The video shows the route through an old Berlin cellar that served as a bunker during the Second World War. The projector follows the movements of the video and so traces the labyrinth of bunker corridors. To avoid ending up in the picture, the viewer needs to reposition himself constantly in the space, and so becomes the one persecuted by the projection.

Kijin Park is currently receiving a grant from the Arts Council Korea to stay at Künstlerhaus Bethanien.