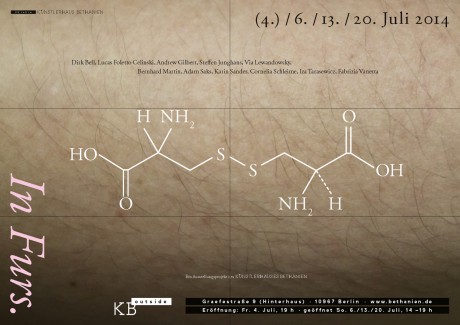 From time to time it becomes necessary to reconsider the institutional and micropolitical aspects of an institute’s work or to re-assess them ‒ in new rooms, for example. In what now amounts to 40 years of exhibition practice, Künstlerhaus Bethanien has supported artists from its programme as they show works outside the Künstlerhaus’ own exhibition space – through placement with galleries, art societies or museums, but also in the context of projects abroad or in direct cooperation with other artists’ residences, like Akademie Schloss Solitude, with which Künstlerhaus Bethanien ran the joint exhibition space “Kreutzer und Stutzig” in Berlin-Mitte.
After successfully completing the move from Mariannenplatz to Kohlfurter / Kottbusser Straße, we are broadening our institutional self-reflection to an un-restored space in Graefestraße 9 (rear building) in Kreuzberg for a few days.
This is a former Kreuzberg workshop on the raised ground floor of the rear building in a block of flats, which used to be the home of the gallery Supportico Lopez.

The theme of the exhibition “In Furs.” ‒ concerned with cultural encoding and human body aspects, reflexes and instincts ‒ surely calls for questioning of the White Cube, and ‒ in relation to skin, hair, hide and fur ‒ a basic debate that needs to be linked in turn to site-specific positioning of both the Self and art.
On four exhibition days, the 4th, 6th, 13th and 20th July 2014, the eleven participating artists will present works that correspond to the spatial context in Graefestraße, as well as reflecting their own specific selection of work on the theme.
Those exhibiting include Dirk Bell, Lucas Foletto Celinski, Andrew Gilbert, Steffen Junghans, Via Lewandowsky, Bernhard Martin, Adam Saks, Karin Sander, Cornelia Schleime, Isa Tarasewicz and Fabrizia Vanetta.
Some have been fellowship guests at Künstlerhauses Bethanien, and they will be showing works from the fields of painting, printed graphic art, sculpture, object art and photography.

The most significant component of hair is keratin. It is a fibrous structural protein that creates a sensory link between man and nature; an erotic attribute and fetish motif, it is often employed in art, literature and advertising. In times when a singing drag queen with facial hair can turn the European Song Contest into a political stage, consideration of hair and beard growth constitutes more than a gag. After all, the Facebook page “Nein zu Conchita Wurst” (1) counted around 37,500 Likes by mid May 2014. Under these circumstances, there is nothing petty about it when artists deal with current body and gender images, fashion issues and emacipatory discourse, the relationship between long hair and wisdom, or the setting of traps regarding the psychological and religious significance of hair and fur.
In this context, the exhibition “In Furs.” also reminds us of its title’s sexual connotation, derived from the book “Venus in Furs” (1870) by Leopold von Sacher-Masoch, and equally of the song “Venus in Furs” by Velvet Underground, on their album “The Velvet Underground & Nico” released in 1967. Similarly, of course there is an echo of all its cover versions by The Melvins, Paul Roland, Christian Death, The Smashing Pumpkins and Monster Magnet. Additional associations are triggered to the song’s frequent usages in surrealist and fetishist contexts and for film soundtracks. Numerous film versions of the novella by Leopold von Sacher-Masoch, most recently one by Roman Polanski (2013), provide a further, tense underlying link to the artworks on show.