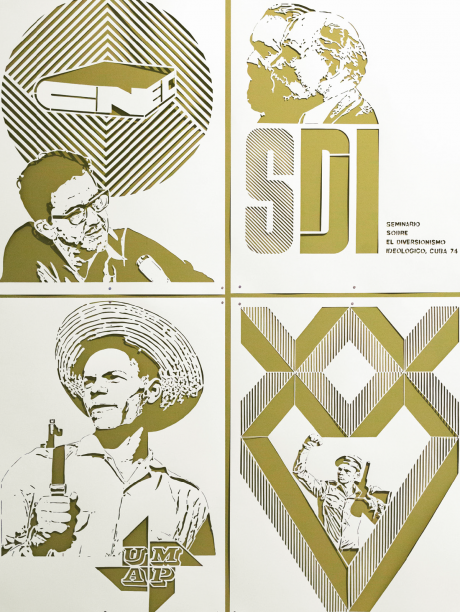 Cultura Profiláctica – with this title Hamlet Lavastida opens his solo exhibition at Künstlerhaus Bethanien, making use of a term from the health sector, which he believes has revealed numerous structures of a prophylactic culture during the pandemic, not only in his country of origin, Cuba, but worldwide.

Lavastida is showing two immersive installations made of paper cuts on opposite walls. On one side, the transcription of Javier Caso’s interrogation (from 2020), which went viral, is linked to a letter by the poet Heberto Padilla written to the revolutionary government in 1971. On the opposite wall, the artist displays a compiled archive of various iconographic and linguistic testimonies from the period in which the institutionalisation of socialism took place in Cuba, especially between the 1960s and 80s. Through his personal confrontation with the cultural archives, which are not recognised as such within Cuban society, Lavastida creates a register and demands a critical examination of Cuban history. In doing so, he criticises the lack of education and memory work in the social system of today’s Cuba.

The exhibition is accompanied by a catalogue including a text by Coco Fusco and Iván de la Nuez.

Hamlet Lavastida (*1983 in Havana/Cuba, lives and works in Havana) works with posters, prints, collages, photos and videos. His work, in the sense of representative archaeology, arose from the need to create an objective criterion for certain hidden areas of the implementation, administration and functioning of state political practices in Cuba. Central to Lavastida’s artistic practice is the re-appropriation of texts, images and symbols, as well as political speeches and ideological terminologies, which he questions critically within the framework of his work. The relevant factor is their reinterpretation using the same or a similar format to that in which they were originally created. Hamlet Lavastida is a grantee of the KfW Stiftung.