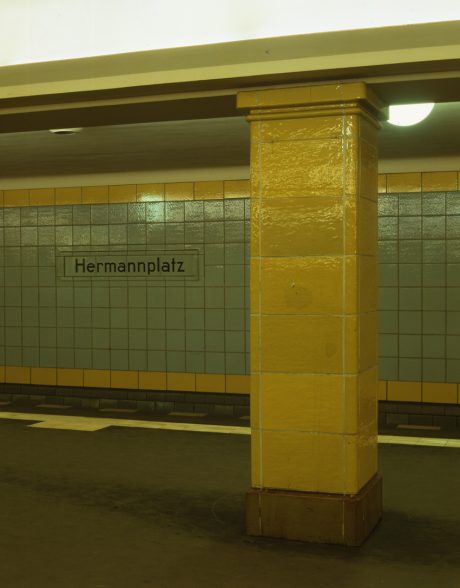 Biljana Popovic’s artistic research deals with questions of society, art in public spaces and the physical structures of our environment. Based on the premise that architectural environments provide information about the people who inhabit or use them as well as about aesthetic or stylistic concepts, Popovic gives architectural or interior design elements in her artistic works a new conceptual framework. By merely hinting at or alienating the familiar, Popovic offers recipients new perspectives on the physical environments in which they move.
Popovic’s project The Doubleghost uses the example of the well-known subway station Hermannplatz to examine the history and architectural history of the Berlin subway and its connections to the political history and ‘national’ identity of Prussia and Germany. In fact, the name of the square does not refer to the first name widely used at the time the station was inaugurated (1926/7), but to the pre-Christian history of Germania: it comes from Hermann the Cheruscan, whose figure became a national symbol of identification with Heinrich von Kleist’s drama Die Hermannsschlacht in the 19th century. Kleist’s work marks the burgeoning German nationalism in literature after Napoleon’s destruction of the Holy Roman Empire of the German Nation. Based on this historical fact, Biljana Popovic’s walk-in installation at Künstlerhaus Bethanien poses the question of the extent to which architectural style depicts political change and architecture can contribute to the construct of a national identity. Popovic has installed pedestals with seats reminiscent of the subway station against the theatrical backdrop of a ‘movable’ fabric station wall with its typical ceramic tiles, and offers visitors the opportunity to follow a commented slide show with archive material, images, artefacts, and floor plans that, with a view of the Berlin subway, add to a multi-faceted history of both the architectural and the political.