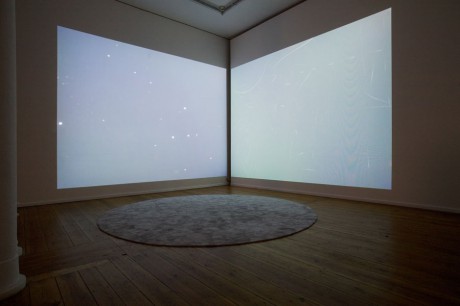 An Te Liu’s space-consuming sculptures and installations consist of standard commercial electrical devices to filter and moisten the air. Piled up beside and on top of each other in the exhibition space, with their straightforward design, air vents and slats, and the cool white and grey colours of their cases, they resemble the model constructions of architectonic Modernism: functional forms, more light and air, and so better atmospheric hygiene. Liu makes use of the formal repertoire of historical Modernism, and references to this in his installations flow into fictive scenarios of the future; when air filters and ionisers are gathered and mounted on panels floating in space, for example, they suggest a futuristic space city or an armada of spaceships that has been launched to defend the galaxy against an attack of killer microbes.

An Te Liu’s current project “Matter” (2008) makes the particles of dirt or dust in the air around us into the focal point of a filmic installation that resembles a scientific experimental set-up: a camera films the floating particles and the individual images are projected onto two large surfaces. However, the timing of the projections is different, meaning that a growing discrepancy develops between the projections during the course of the exhibition, but also between what is filmed and one transmission; as a result, a discrepancy between reality and image, belief and knowledge also emerges.

An Te Liu holds a fellowship from the Canada Council for the Arts, Ottawa, and the Canadian Embassy, Berlin, in the context of our International Studio Programme.