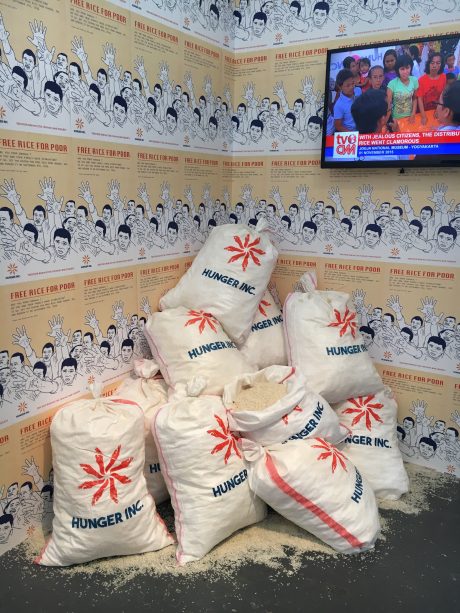 Elia Nurvista (born 1983 in Jogjakarta, Indonesia, where she lives and works) works at the interface of fine arts and research-based community projects. Most of her projects revolve around the topic of food as the entry point to political, cultural, social and gender-specific issues. In her events, performances and installations she not only focuses on the physical appearance of food and its representation, but also on the act of cooking as a form of social interaction. For her work “Hunger Inc.” (2015), Nurvista set up a tent, similar to NGO tents. It was equipped with a kitchen, a dining table and a TV, which broadcasted news of riots related to the distribution of rice. The room installation was accompanied by a series of events including people, who witnessed similar situations. With this participative project Nurvista aimed to investigate the relationship between poverty and aids, respectively staple food. The problematic handling of food is also addressed in her work “Sucker Zucker” (2016). Shaped like crystals or diamonds and installed on white pedestals, the colourful sugar sculptures refer both to the attraction of the product and to its exploitative and violent acquirement since colonial times. In this manner, Nurvista raises awareness of the complex relations between biomaterials and their historic and social contexts.