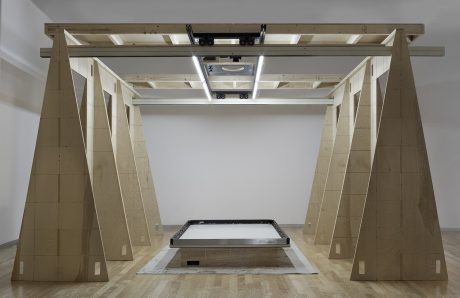 ADAM SCHREIBER is an American artist and photographer based in Texas. He works primarily with large format film, being partial to its slow, withholding, and resilient nature. Minor institutional sites and archives often serve as the basis for long-term projects. Generally, Schreiber is interested in subject formation, the latent images institutions generate, and how photographs continually provoke confrontation with the non-linear nature of time.

For instance, the Social Service Administration Library (Mies Van Der Rohe, 1965, Chicago) is the setting for Living High, Letting Die, a series of photographs and a short film. The project tracks an impossible camera position as it circumnavigates the space. Using the visual logic of the grid, the camera’s authoritative framing intersects the library’s holdings; literally, books whose titles are bound together by the premise of social service. While the architecture exerts an iconic image of itself, a language of illness pervades the library catalog. This formal ambivalence becomes all the more apparent as one realizes that the ample sunlight in the space is destroying the books. Through image repetition, camera levitation, and a text culled from books whose titles imply relevance for both the clinical and optical realm, Living High, Letting Die is a meditation on oblique fantasies underlying the objective vernacular, be they photographic, architectural, or clinical.

Mapping such intersections is in some sense the artist’s medium. For Building 45, a surplus facility at a research university becomes the setting for a multi-year project about the limits of bureaucratic instrumentality. After finding a discarded 4 x 5 Linhof camera on his first visit, the artist began a project photographing the site with the Linhof, exposing and developing approximately 1300 sheets of film over a period of years. In the course of doing so, the facility is shown to be an unacknowledged archive for the larger institution’s commitment to planned obsolescence. The photographs made amidst the disorder and abundance of the deaccessioned research equipment, downstream from a vast network of research funding, stewarded by non-specialists, and informally accessible to approved affiliates of state-subsidized institutions, will eventually be published as Building 45.