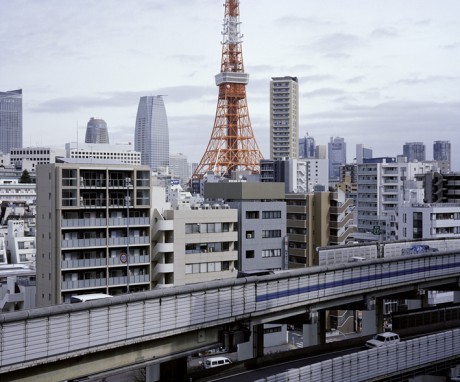 In his photographs Yasutaka Kojima is concerned with the urban networks in big cities. He is especially fascinated by their dimensions, which have expanded far beyond what was intended and can no longer be controlled by humanity – something that has led to an increasing sense of alienation between man and the city. In the artist’s eyes, the city conveys a feeling of transience and loneliness. His three series of works to date have been produced in Tokyo, his home city, New York (where he lived for a long period), and in Berlin. The first two cities represent the outcome of both human and urban greed to Kojima. Human identity and a sense of belonging have been abolished long ago within the urban network. Kojima captures this development with his camera but still lends a strange beauty to the urban ugliness. By comparing and contrasting human creations like architecture with a lack of real people, Kojima underlines the city’s alienation from mankind.
The current series Tokyo | Berlin includes views of Berlin, whereby there is an obvious change in mood by contrast to the previous series. The pictorial language is quieter and more two-dimensional – for Kojima, the atmosphere here is less influenced by greed and coldness. In the images reminiscences of past history and architecture can be found, staged in an artful way by Kojima.

Yasutaka Kojima is currently participating in our International Studio Programme, sponsored by a private donor.