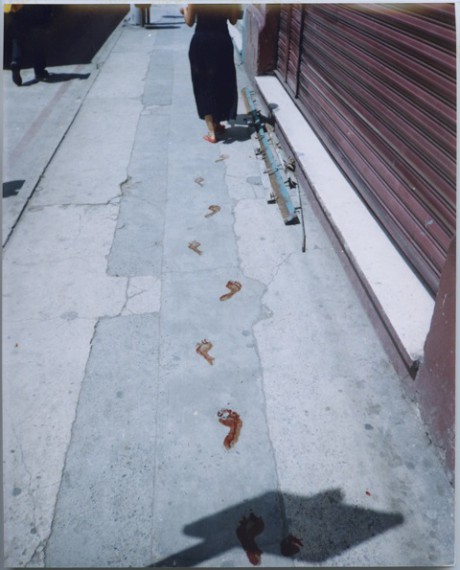 Regina José Galindo, born 1974 in Guatemala City, lives and works in Guatemala. Galindo is a world-wide acclaimed performance-artist, reflecting issues of gender, power-relations, genocides and the relation of public and performer. Many of her performances are documented by the medium video, becoming art-pieces in their own means.

Tierra, 2013
– “The army officers had been drinking in a bar called The Three Little Monkeys. In the small hours, when they were all quite drunk they decided to go and celebrate by killing people.”
– “How did they kill people?” asked the judge.
– “First they ordered Garcia who was operating the bulldozer to dig a trench. Then the trucks loaded with people parked up opposite El Pino and one by one the people were taken out. They did not shoot them. Usually they were stabbed with bayonets. They tore their chests with the bayonets and then they carried them to the grave. When the grave was full the bulldozer covered the bodies with earth.”
(Testimony was heard during the genocide trial of Ríos Montt and Mauricio Rodríguez Sánchez, Guatemala City 2013)

Marabunta, 2011
Caribbean Ants
“you imagine the caribbean sea like an anteater devouring the Antilles” (Homero Pumarol R.D.)
An action that consisted of totally dismantling a car, on the public space and with Galindo as the driver inside. A team of 21 men approaches her when she  parks the car and begins to take it apart, piece by piece, until it has entirely disappeared.

¿Quién puede borrar las huellas?, 2003
A long walk from the Constitutional Court to the National Palace of Guatemala, leaving a trail of footsteps made in human blood, in memory of the victims of the armed conflict in Guatemala, and in rejection of the presidential candidacy of the military, genocidal and former coup supporter, Efraín Ríos Montt, Guatemala 2003.