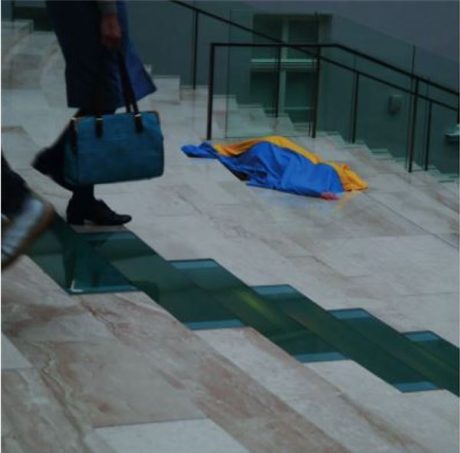 MARIA KULIKOVSKA
Documentation of the performance “254”
2014

The name of the performance “254” is identical to the refugee number that Kulikovska was given while leaving her homeland Crimea several months earlier.

During the performance the artist wrapped herself in a Ukraine flag and, without official permission, laid down on the main staircase in the Hermitage Museum in Russia during the Manifesta biennale in 2014, imitating the dead bodies wrapped in her country´s flag on the streets of Kyiv during Maidan Revolution and in Eastern Ukraine during the war.

MARIA KULIKOVSKA
Born in 1988 in the city of Kerch, Ukraine. Graduated from the National Academy of Fine Arts and Architecture, Kyiv, Ukraine. From 2016 to 2017, she studied at the Royal Institute of Fine Arts, Stockholm, Sweden. Participant in the project MUHi 2011. Nominated for the Pinchuk Art Prize 2013. Author of architectural projects (in particular, Shcherbenko Art Center building) in Ukraine, Switzerland and China. She has held lectures and workshops on contemporary art in Kyiv (VCRC, Bottega gallery, PinchukArtCentre), Donetsk (IZOLYATSIA), Dnipro, Liverpool and Malmö.
Now in Austria.