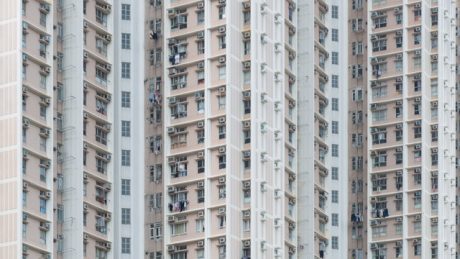 Serial Parallels is an experimental portrait of one of the most vertical cities in the world: Hong Kong. More than 9000 high-rise buildings divide up the valuable property of its densely populated coast today. In the 1950s it was necessary to accommodate refugees who fled communist China, so Hong Kong adapted the modernist philosophy of affordable mass architecture to create monumental public housing areas, fueling an industrial boom.
German-born and Hong Kong-based artist Max Hattler examines these self-similar housing structures by traversing photographs of Hong Kong Island, Kowloon and the New Territories with an artificial camera. In his precise cinematographic dissection, he reveals stroboscopic effects within the repetition and multi-layered illusory perspectives — while structural variations of the architecture become animated in themselves. Each floor of a high-rise building corresponds to a singular frame of a celluloid film strip, ingeniously merging technological as well as conceptual timelines of modern architecture and experimental film.