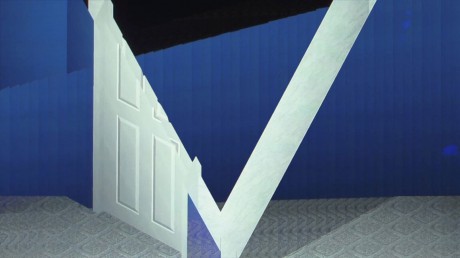 On first sight, the video work Rooms resembles the visual experience of early computer graphics, however it is part of the eternal return of digital technologies. With every wave of technological simplification, from supercomputers to smart phones, it reaches a broader audience, turning formerly incomprehensible usage metaphors into something self-evident.
Ludy has a masterful understanding of transforming these known media-archaeological spatial concepts. The repertory of forms for Rooms derives from the anonymous archives of the internet. Due to the digital transformation, amongst others from a linear perspective to a fragmented parallel projection – revealing all spatial axes – the optical stability is undermined. By filming these sequences projected on her studio walls the artist finally merges them into an inextricable physical-virtual system of high stability.

The on-going screening series Phantom Horizons presents works that question the paradigm of the linear perspective, seeking for a new kind of “status perspective” (“Bedeutungsperspektive”). The latter is a development of medieval painting, in which the size of figures is determined by their hierarchical significance. Taking this approach and combining the avant-garde ideas of cubism and futurism with today’s possibilities of film creation, the works presented open up multifaceted, unseen horizons.