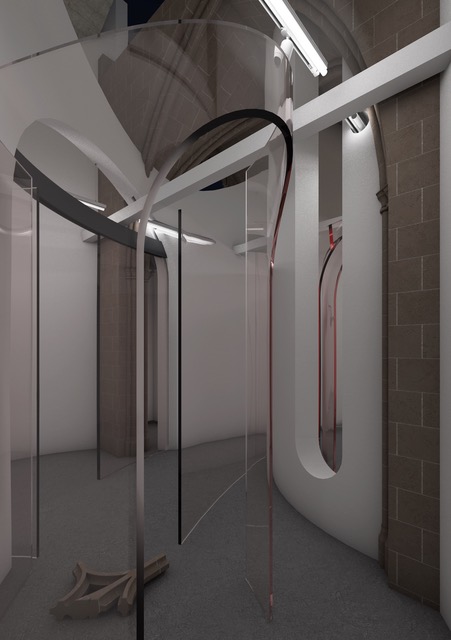 Bellapais Abbey, the ruin of a 13th century monastery in northern Cyprus, is the subject of investigation for the site-specific, virtual installation Transmundane Economies. Testament to many lives, following the different colonial periods over the centuries, the monastery went through changes, architectural but also cultural, organizational and operational.

Theo & Daki address the long-lasting, shape-shifting history of Bellapais Abbey to discuss the codes and hierarchies that have been established and inscribed into it over the years. Starting from the architectural structure as well as the ceremonial use of the place, while examining its narratives, liturgy and history, the artists speculate on the relationship between queerness, restoration and reinvention.

Visitors to the exhibition are immersed in the partial reconstruction – based on drawings by George Jeffrey from 1912 – of the monastery’s Gothic refectory by means of VR technology. In this way, alternative paths and possible uses that deviate from colonial interventions of the past become free and accessible. The virtual architecture, which in its digital translation appears to be sacred yet free of Christian intentions, in turn exposes the socio-political fabrication of the monastery. Besides this conceptual grounding, by virtually transposing the site into the gallery space, the artists turn the ruin into an event rather than an object, proposing an alternative to acquisition in this way.

The Cypriot Orthodox Church exerts a strong influence on the political affairs of the island and participates in the instrumentalization of the national collectivity, often through the superintendence of gender and sexuality. In doing so, it claims to protect the Greek Cypriots from ‘the ethnic other’ as described by Nayia Kamenou in her text Sexuality, Gender and Nationhood in Cyprus, and hence exploits the country’s postcolonial milieux. The queer community on the whole island is therefore not only subjected to marginalisation based on their sexuality but on all the processes of identity formation that constitute their bodies; race, class and gender. Transmundane Economies is an offer to discuss mechanisms of inclusion and exclusion, and to think of the potentiality of any place to transcend its own physicality and hence escape its embodied ideological charge and power.

Theodoulos Polyviou (*1989 in Nicosia, Cyprus) & Dakis Panayiotou (*1988 in Limassol, Cyprus) Theo & Daki is an artist duo from Cyprus working together since 2018. The pair seek to find unity through their work. The amalgamation of their practices is politically motivated and removes the focus on individual creative oneness, to provide an opportunity for the artists to excogitate on a ‘hybrid’ mode of production. Theo & Daki have been developing research around virtual reality from a decolonial position and in doing so they resituate exhibition-making through virtual and experiential happenings, shifting away from the dominant, institutional narratives. In an era of virtual citizenship, where political decisions and laws transform physical space into a virtual territory, the artists revisit Cyprus as a colonised site within EU borders.

In 2021, Theo & Daki showed their work in the Cyprus Pavilion at the Venice Architecture Biennale.

Writer Jazmina Figueroa has been commissioned to arrange a sound piece for the installation at Künstlerhaus Bethanien.

THEODOULOS POLYVIOU is a grantee of UNDO Contemporary Arts and Cultural Services and the Ministry of Education and Culture, Cyprus.