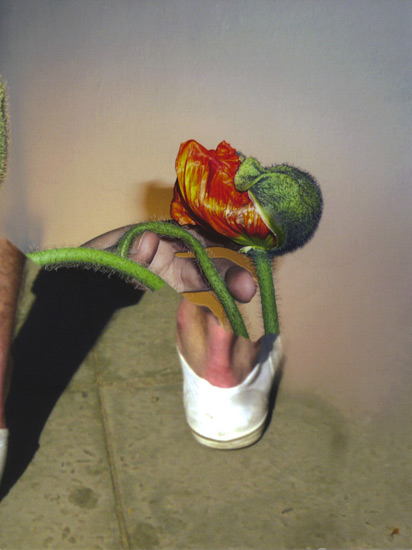 Miguel Ángel Tornero’s artistic work is based on an extensive personal photo archive, which the artist collected together over a period of many years by almost obsessively taking documentary photographs of every conceivable situation and occurrence, plants, animals, people or architectural environments. These images provide the starting material for Tornero‘s digital collages. Tornero‘s pictures are equally striking because of a physical presence and because of the fantastic-surreal aspect they convey while simultaneously and skilfully alienating the apparently familiar. Tornero‘s latest works, which are now being shown in Künstlerhaus Bethanien, have come to include more and more experimental components. By employing computer programmes to generate and process photographs, he incorporates ‘mistakes’ and incongruous components into the image, meaning that the final result is largely left to chance – for the artist, this is also an opportunity to question his own work and extend the limits of his medium. A book will be appearing for the exhibition which extends Tornero‘s work experimentally on the level of literature by presenting the machine-generated translations of a text into Spanish, German and English including all their mistakes, idiomatic blunders and frequent involuntary comedy.

The project is kindly supported by: The State Corporation for Spanish Cultural Action Abroad (SEACEX) and the Directorate General for Cultural and Scientific Relations, Spanish Ministry of Foreign Affairs and Cooperation.