The Museum of Longing and Failure 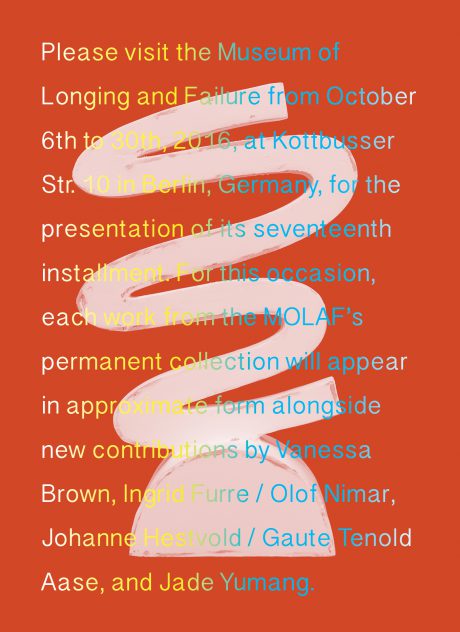 The Museum of Longing and Failure (MOLAF) is a collecting entity established in 2010 by Andrew Taggart and Chloe Lewis.
Its form takes shape through a sustained conversation with living artists and collectives, whose contributed sculptural works form the basis of ongoing installations and interventions. Through presentation, production, and publishing, the MOLAF strives to constantly question its own structure, identity, and capacity to both support its collection and generate new forms.

For the MOLAF’s seventeenth installment, held at Künstlerhaus Bethanien, each sculpture from the MOLAF’s permanent collection will be represented in approximate form alongside new contributions by Vanessa Brown, Ingrid Furre & Olof Nimar, Johanne Hestvold & Gaute Tenold Aase, and Jade Yumang.