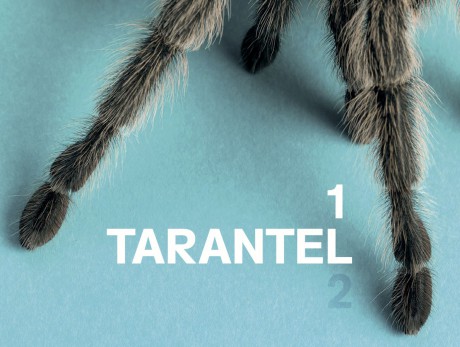 A tarantula is an arachnid from the family of wolf spiders. Signs of poisoning and St. Vitus’ dance are generally attributed to the bite of the tarantula.
TARANTEL 1 seeks its quarry among a curious public, with five artistic positions that Künstlerhaus Bethanien is setting into an international context for the very first time: their pictorial reality, remarkably promising and dangerously enticing, emphasizes a feminine side. Visitors must decide for themselves whether viewing these images will have detrimental effects on them.

Winfried Bullinger’s photographs place an emphasis on depicting the condition humaine. In the Künstlerhaus, Bullinger is showing three portraits of women from the series Nomads, women belonging to peoples that still live in largely autonomous societies between the Blue Nile and Lake Turkana in Africa. There, too, the global search for resources, failure of the expected rains, and political and armed conflicts are leading to far-reaching social changes. Bullinger’s photographs, which are taken in black and white using a large-format analogue camera and in natural daylight, are something between documentation and staging. / www.wbullinger.com

Steffi Klenz’ work unfolds in urban places and buildings but it is not architectural photography but instead engages with the space in question as a location for transition and transformation. For the Surrealist poet Louis Aragon, buildings were “thresholds to a kingdom of the marvellous” and Klenz’ photographic work also presents the house as more than a “machine for living” as identified by the modernist Le Corbusier: a theatre of the domestic that represents the interior environment as a mysterious space of a fragmented kind. / www.steffiklenz.co.uk

Melissa Moore presents Land Ends, a selection of photographs taken on the Hornby Island, Canada, where she retired for several times over 13 years. Her work takes its cue from the architecture of the place, largely inspired by Shelter, the book published for the first time in 1973 that gave birth to the current revolution of Green Building. / www.melissamoore.info

Rachel Rom is using her portraits (previously exhibited as such) as raw material, to create four installations: echo, vector, remanence and nucleus to question the relationship between the author and his work and the definition of art. She is using the concept of distance to demonstrate the futility of the material work, re-photographing portraits to give them a remanence in time. Her subjects move forward in time, but do not age. As if renovated. / www.rachelrom.com

Kerstin Schröder’s work Study after Grünewald shows a man’s head distorted into a scream; it is the translation of a drawing by Matthias Grünewald into the third dimension. In this sculpture the motif of pain that is so identificatory and thus comforting in Grünewald’s work becomes the desired result of an obsessive female fantasy of revenge – an ironic comment on the immanence of a sexist reality. Virago I is a bronze cast of an old leather horse-collar. With its undeniable likeness to the female sex, it extends the issue of power relations between human being and beast to include man and woman. / www.kerstin-schroeder.de

With generous support from the Governing Mayor of Berlin, Senate Office – Cultural Affairs