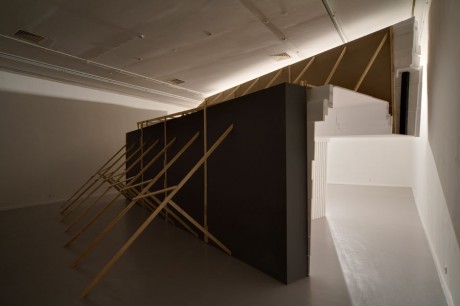 Søren Lose’s current artistic practice concerns topics such as architecture, symbolism, power and myths. The basis of his work is found documentary material, which he presents in new aesthetic and conceptual contexts. “Abendland” (Occident) is a project concerning the history of Berlin, a place where diverse epochs and political systems are mirrored in the city’s architectural appearance everywhere: bullet-ridden facades from the Second World War, prefabricated GDR buildings, Nazi architecture, communist memorials or post-modern office blocks.

Entering Søren Lose’s space-consuming installation in Studio 2, one is immediately struck by the model of a neo-Classical, white facade at the back of the room; it seems to be half sunken into the floor, and only when one looks more carefully is it recognisable as an entrance portal to the “New Reich Chancellery” built for Hitler by Albert Speer – of which, however, no trace remains in today’s city. By focusing attention on the building as a model in a public place, Søren Lose poses the question of whether a dark chapter in history can be ‘wiped out’ without trace simply by removing its symbols; calling for critical discussion, he also appeals to each of us to handle his own personal history with more awareness.

Søren Lose holds a fellowship from the BERLINAUT programme of the Royal Danish Embassy Berlin in the context of our International Studio Programme.