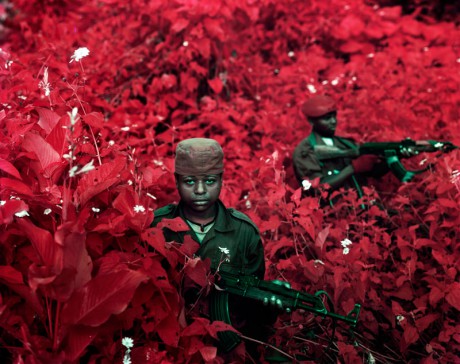 In his photographic research, Richard Mosse makes use of a discontinued military surveillance technology. The color infrared film Kodak Aerochrome was originally developed for camouflage detection and registers an invisible spectrum of infrared light, rendering green landscapes in vivid hues of lavender, crimson, and hot pink. In the late 1960s, the medium was appropriated in the cover art of albums by rock musicians, and trickling into the popular imagination as the palette of psychedelic experience.

On his journeys in eastern Congo, Mosse photographed rebel groups of constantly switching allegiances, fighting nomadically in a jungle war zone plagued by frequent ambushes, massacres, and systematic sexual violence. Mosse discovered a disorienting and ineffable conflict situation, so trenchantly real that it verges on the abstract, at the limits of description. Infra offers a radical rethinking of how to depict a conflict as complex and intractable as that of the ongoing war in the Congo and initiates a dialogue with photography that begins as an intoxicating meditation on a broken documentary genre, but ends as a haunting elegy for a vividly beautiful land touched by unspeakable tragedy.

Richard Mosse is currently participating in our International Studio Programme.