another Exhibition
An Te Liu 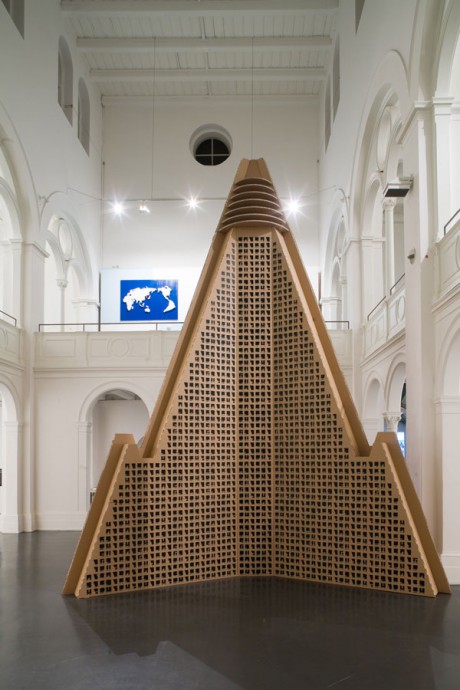 “Even in the year Juche 97, which is known elsewhere as 2008, North Korea seems to be on a different planet. The Great Leader Kim Il Sung, who died in 1994, rules as an Eternal President. His son Kim Jong Il is the much-loved leader. Military parades are flashy. Statues are up to 20 metres high. The precision of mass gymnastics takes your breath away. Little permeates to the outside. Little penetrates to the inside. North Korea orbits around itself. North Korea is an irritation. It threatens its neighbours with the atom bomb, fails to feed its population adequately, and operates secret penal camps. The few thousand visitors each year see nothing of this. The totalitarian regime guides its guests through a total stage-production of the state.” (Christoph Möskes)

The exhibition “PjönjangPjönjang” by Jenny Rosemeyer and Eva-Maria Wilde attempts to reflect the two artists’ private journey through North Korea in the year 2007. In this context, both external and internal views of North Korea are presented and long-established positions are questioned. The artists take a critical look at the construction of the artist as an observer and at his/her relation to society as well as reviewing existing research. The exhibition’s theme is the transformation of political into subjective artistic aesthetics. Works are shown that reflect the actual subject of observation – the country of North Korea with its current and historical contradictions – yet immersed in artistic aesthetics.

The artists represent their view of the country and its society in objects, three-dimensional works, photographs and collages. To supplement this, various other artists will be invited to show their existing works about North Korea. A small video library with original film material from North Korea and critical documentaries about the country from recent years will be made available to the exhibition visitors. In addition, travel literature and further documentary material will be provided for reading. By presenting a view of the country characterised by a subjective artistic standpoint and yet also incorporating a documentary level, the intention is to facilitate a new perspective on the phenomenon North Korea for visitors.

During the exhibition opening – at 8 pm on 18th September – we will be showing the film “Der Rote Stern – Alltag in Nordkorea” (2006) by Bernd Girrbach and Elke Werry.

At 7 pm on 25th September, Jörg Friedrich will be reading excerpts from his book “Yalu. An den Ufern des dritten Weltkrieges” (Propyläen-Verlag, 2008) among the exhibits in Studio 1.

“PjöngjangPjöngjang” is being realised with generous support from the Governing Mayor of Berlin, Senate Office – Cultural Affairs.