This is not a love song 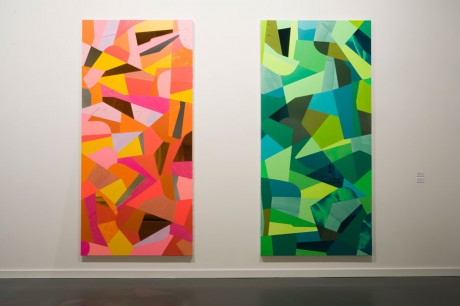 he exhibition PAINTING AS PRESENCE / This is not a love song is aimed at visitors who are curious and interested – parallel to the BERLIN BIENNIAL – in getting to know positions of painting with very different references and origins, the majority of which nonetheless emerged in Berlin.

On the basis of selected examples, “PAINTING AS PRESENCE” seeks to demonstrate Swedish, Danish, Finnish, German, Polish and Spanish artists’ shared interest in the material of painting and in painting’s intrinsic quality. The exhibition refers to the essence of the phenomenon of painting, whereby it also involves certain elements critical of the media.
The subtitle “This is not a love song” should be understood as a rejection of self-indulgent, “romantic gawping”. In this respect, the exhibition does not operate on a narrative-literary level, but is allied to a (pop) cultural, cool and distanced approach.

In addition, “PAINTING AS PRESENCE” takes up a text and a past exhibition by the curators Mika Hannula and Kari Immonen (published by NIFCA, Helsinki, 2002), which already used an “extended” concept of painting in order to clarify the principles of slowness, of a frozen interval of time and of tangible intervention in space.

In a ping-pong process, the staging of reality and a presence that is tangible through the surface of painting – the reality of painting – expand on the issue of “Realism” and help to distinguish “realisms” (in the sense of portrayal technique) and “realities”.