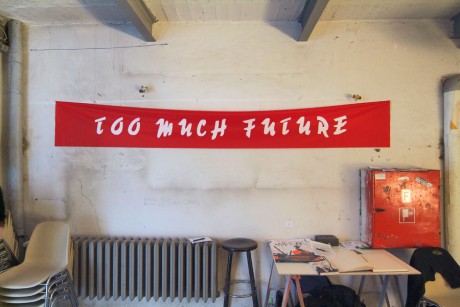 Whilst the social deprivation suffered by British teenagers found expression in the slogan “No Future”, the socialist misery of the strictly regulated lives of young people in the GDR could be said to originate with rather too much of a future. The unwilling recruits of the Party’s Combat Reserve started taking liberties hitherto unimaginable in the context of the GDR. Unflinchingly, they were challenging a state whose fierce resistance to the youngsters’ rather innocent anger left some of them with troubled biographies. Punks wrote a bizarre chapter in the GDR’s history, alight with the non-conformist eccentricity of their actions, and obscured by the secret services’ vicious persecution.

The resulting energetic release soon spread out of dingy basements and scarce meeting places into the studios of younger artists as well. Thus Punk became a formative influence in many budding artists’ works and lives, and once absorbed by an, albeit elusive, counter culture, the movement even disseminated into reserves of the socialist high-brow, among the students at state art schools and universities.

Regardless of whether they were artists or not, for many of its proponents Punk in the GDR represented no more than a transitionary space. Emigration or the collapse of the GDR did not halt their lives, and their biographies continued to progress in the most diverse directions and turns.

The exhibition, designed by artist Andrea Pichl, will present a historic background into the relevant cultural environment, as well as original artwork.

Visitors will have the opportunity to listen to rare, original recordings of music by GDR Punk bands in specially provided audio spaces.

The exhibition will be accompanied by a comprehensive programme of events and a catalogue publication.