Sunny Side Up and other sorrowful stories 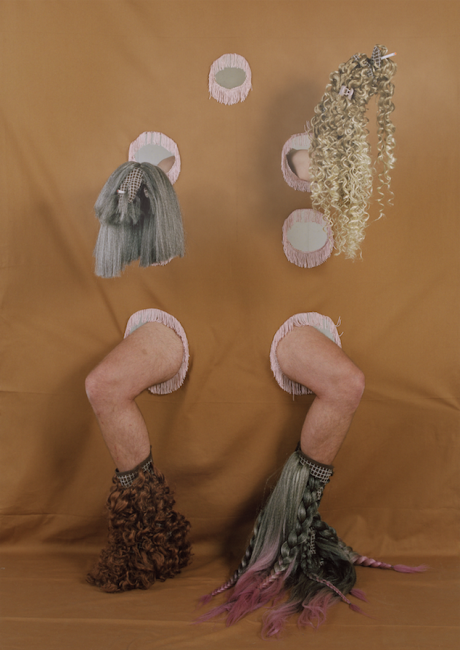 In Sunny Side Up and other sorrowful stories, Mike Bourscheid stages costumes, props and his new film Agnes into a walk-in spatial installation. As is often the case in his artistic work, he plays with interpersonal relationships. Based on film props and inspired by experiences of his childhood and the relationship with his single mother as well as his absent father, Bourscheid developed the script. Agnes consists of film footage taken from his parents’ home as well as footage shot on the film set at Künstlerhaus Bethanien. The artist himself becomes the protagonist, who is hindered by his costumes and at the same time given new abilities, through his shirt for example, on whose back he has installed an Ouija board that can serve as a communication device through personally defined rules and can, for example, reach his deceased stepfather.

The daily confrontation of the body in the household and the performance of care in general are central. The routine that emerges in the repeated washing of clothes, the dishes, keeping things tidy or sweeping the floor is staged in a very playful way. With his usual craftsmanship, Bourscheid made further props, such as gloves and socks, to which he attached wigs. In this way, the props appear highly obstructive to household chores, while at the same time revealing a commentary on the affectionate, as well as often absurd attention paid to everyday objects. The film, which is supported by ASMR sounds getting under the skin, also include camera shots that are reminiscent of the stagings in classic horror movies. Clichés about materials and fields of activity with masculine and feminine connotations are exhibited without being judged. Instead, they speak for the many identities that are learned within society or within the family and can permanently change.

MIKE BOURSCHEID (born in Luxembourg) lives and works in Vancouver, Canada. He studied at the Université d’Aix-Marseille and at the Universität der Künste in Berlin. The solo exhibition Idealverein is on view at the Heidelberger Kunstverein until 31 October 2021. Bourscheid represented Luxembourg at the 57th Venice Biennale (2017). He has exhibited at the Haverford Centre Philadelphia, Kunstverein Braunschweig, Nanaimo Art Gallery and Casino Luxembourg – Forum d’Art Contemporain (Luxembourg). Mike Bourscheid is a grantee of the Ministry of Culture of the Grand Duchy of Luxembourg. www.mikebourscheid.com

The access to the exhibition is only granted for recovered, vaccinated and tested persons. A valid test or complete vaccination must be shown at the entrance. Recovered persons must present a positive PCR test result that is at least 28 days and no more than 6 months old. Thank you for your understanding.