These arms of mine 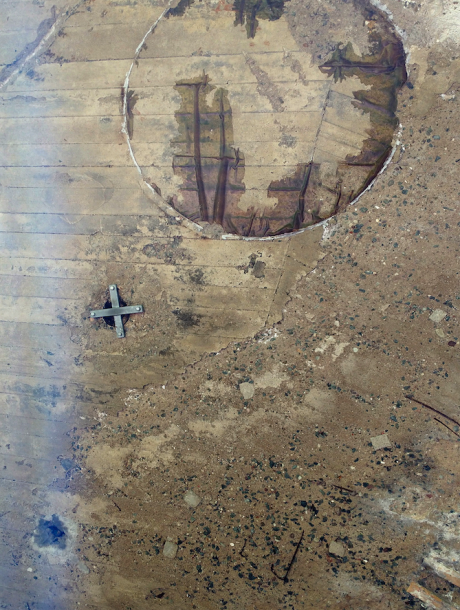 Kandis Friesen’s solo exhibition These arms of mine is grounded inthe relations of the materiality of stone, memory, and power. Thinking through their distributed formations in the world around us – as in architectures, monuments or landscapes – the artist began this work with the Schwerbelastungskörper (german:Heavy Load-Bearing Body), a giant concrete column in the Tempelhof district of Berlin. Built during the National Socialist era in 1941 using forced labour it was used to test the suitability of the swampy Berlin soil as part of the redesign plans to transform Berlin into the “world capital Germania”. Since the massive cylinder could not be removed after World WarII, it remained as a monument itself and has been steadily sinking further into the groundever since.

Drawing on the form, material, and sound-image of stone structures in the city and beyond, the exhibition functions as a montaged site, where processes of construction and circulation overlap. Using dimensional lumber, sound blankets, found objects, field recordings in video and sound– the installation is joined through Friesen’s poetic script, a “film without images” about the temporality and materiality of stone. In this experimental narrative, leaps between time and place emerge. It connects the imperial with the individual, places of remembrance with places of destruction, and legacies of violence with legacies of power and wealth. These arms of mine is part of an ongoing series of works that explore sound and monuments as site-specific, resonant materials.

Friesen’s work mainly uses collage and assemblage to sort ways of seeing surfaces and their sounds. She uses the acoustics of architectures, song, spoken language and oral history to create acoustic territories that can be heard and felt. Her montage process leads to the construction of a “diasporic site-specificity”, through which the fixed can be refused, andconstantly changing structures can be made visible.

Kandis Friesen (b. 1978) is an interdisciplinary artist based in Tiohtià:ke/Montréal and Berlin. In 2022, she will present a major solo exhibition at the Museum of Modern Art, Odessa, Ukraine. She recently presented solo exhibitions at Plug In ICA (Winnipeg, Treaty 1 territory), TRUCK Contemporary Art (Mohkinstsis/Calgary) and the Chicago Architecture Biennial at the Roman Susan Art Foundation (Zhigaagong/Chicago). As a filmmaker, she has been featured at the FIFA Festival International du Film sur l’Art and the Jihlava International Film Festival. Kandis Friesen is a grantee of the Conseil des arts et des lettres du Québec, the Ministère des Relations internationales et de la Francophonie du Québec and the Québec Government Office in Berlin.

The access to the exhibition is only granted for recovered, vaccinated and tested persons. A valid test or complete vaccination must be shown at the entrance. Recovered persons must present a positive PCR test result that is at least 28 days and no more than 6 months old. Thank you for your understanding.