another Exhibition
Böhme And Beyond 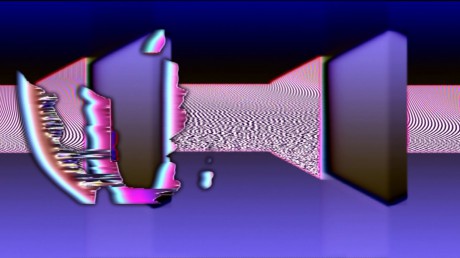 The work Visites Possibles (7:04 min, music: Roger Tellier-Craig) by Sabrina Ratté creates a contemporary illusionary space from the variation of an art-historical cognition. While the pulsating labyrinths seem reminiscent of early 3d graphics, they are actually composed from two-dimensional feedback loops of a video synthesizer. The choice of colours is oriented on the so called Colour Perspective, which is mostly known from its tradition in painting. The phantom horizon of the film points most directly to this illusionistic idea, that relates a stronger dominance of the colour blue with an increased image depth. Ultimately the Colour Perspective does not heighten an existing landscape in Visites Possibles, but becomes the material for a simulated spatiality itself.
Sabrina Ratté, *1982, lives and works in Paris, France
www.sabrinaratte.com

The on-going screening series Phantom Horizons presents digital as well as analogue works that question the paradigm of linear perspective, seeking for a new kind of “status perspective” [Bedeutungsperspektive]. The latter was a development of medieval painting, in which the size of figures is determined by their hierarchical significance. Extending this approach with deconstructivistic ideas and contemporary possibilities of film creation, the presented works open up multifaceted, unseen horizons.
Curated by Robert Seidel | www.robertseidel.com