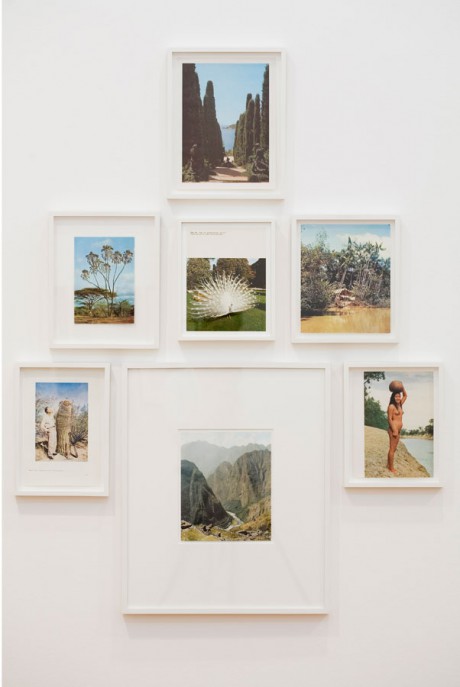 Haris Epaminonda uses various collage techniques – making cut-outs with a scalpel, tearing out certain parts of a picture, or constructing neat paper folds –
to rework found footage from picture books or old film footage. But unlike the seamless juxtaposition characteristic of classic montage patterns, the images she creates remain in a subtle state of suspension. Obtained by assembling scalpel-chiselled cut-outs, her small paper formats, in which different layers of photographic imagery overlap, are fragile compositions based on formal-aesthetical considerations. Epaminonda is mainly concerned with the tension created by associating individual elements and issues of perspective and space.

Her working method is thus often based on intuition and effectively undermines any sense of clear signification and symbolic dramaturgy. In Studio 3 Epaminonda is showing an installation exclusively composed of found images. They were chosen for their power of seduction and were left untouched to be displayed in a classic museum hanging. In absence of a strict thematic order, the only characteristic shared by the images is that they were culled from books printed between the 1930s and 1970s. When explaining her choice, Epaminonda invokes the haptic and sensual qualities of ‘old’ materials and printing techniques. This installation is in fact the spatial continuation of the artist’s small collages – a “collage in space”, in her own words – but is nevertheless to be viewed as an entirely new work which is more than the sum of its elements.

Haris Epaminonda is currently in residence at the Künstlerhaus Bethanien’s International Studio Programme thanks to a grant by the UNDO Foundation, Cyprus.