WOMEN ATHLETES – Sports Against All Odds 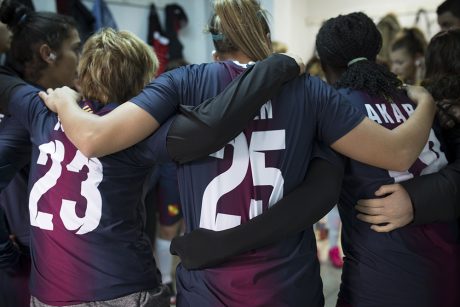 Starting from a decidedly feminist perspective, the Turkish photographer and video filmmaker Gülşin Ketenci develops her own special approaches to the subject matter in all stages of her production process. The main intention of her photographic narratives is to focus on the impact of women in all areas of society and to create public awareness of their work and commitment.
In earlier photo projects, Ketenci dealt with topics such as paid work in the household or women as politicians–areas which are still being ascribed “female” or “male” gender to the present day. Ketenci is currently working on a long-term project about Turkish sportswomen active in disciplines such as football, boxing or martial arts–sports that are generally defined by strength, physical contact and a certain aggressiveness, characteristics that are traditionally attributed to the “masculine”. Often, the women active in these fields are discriminated against as “unfeminine” and marginalized by a refusal to publicize their activities and by confronting the sportswomen with the disinterest of the media as a whole.
Ketenci’s exhibition shows her latest photos, most of them taken in Berlin, depicting young sportswomen whom she had the opportunity to get to know personally and to accompany in various situations around their everyday sporting life. In the context of this current photographic project, which she will continue in Istanbul after her return, Ketenci aims to create public visibility for these women athletes and to show their talent, their efforts and their professional skills, which are in no way inferior to those of men.

GRANTEE OF
Be Mobile – Create Together!